The fourth industrial revolution and oncoming of the second machine — as it is being often hailed — has led to new disruptive technologies emerging, even as many bit the dust in the last few years.

So how do CEOs and their top teams even begin to make sense of the swirl of technological breakthroughs affecting business today? How do they gauge the impact of artificial intelligence on their companies’ future compared with, say, the Internet of Things or virtual reality?

A PwC study some time back identified top eight disruptive technologies that matter now, and will have far-reaching impact in the days to come. The team tracked more than 150 discrete technologies and analyzed for technologies with the most cross-industry and global impact over the coming years.

These technologies are at varying degrees of maturity; some have been around for years but are finally hitting their stride, while others are maturing rapidly. While listing the technologies, we also tell you how they are allied with geospatial and the future prospects viz a viz our industry.

Artificial Intelligence (AI) has entered our daily lives like never. AI can be explained as algorithms that are capable of performing tasks that normally require human intelligence, such as visual perception, decision-making, or language processing. AI is an “umbrella” concept that is made up of numerous subfields such as machine learning and deep learning. 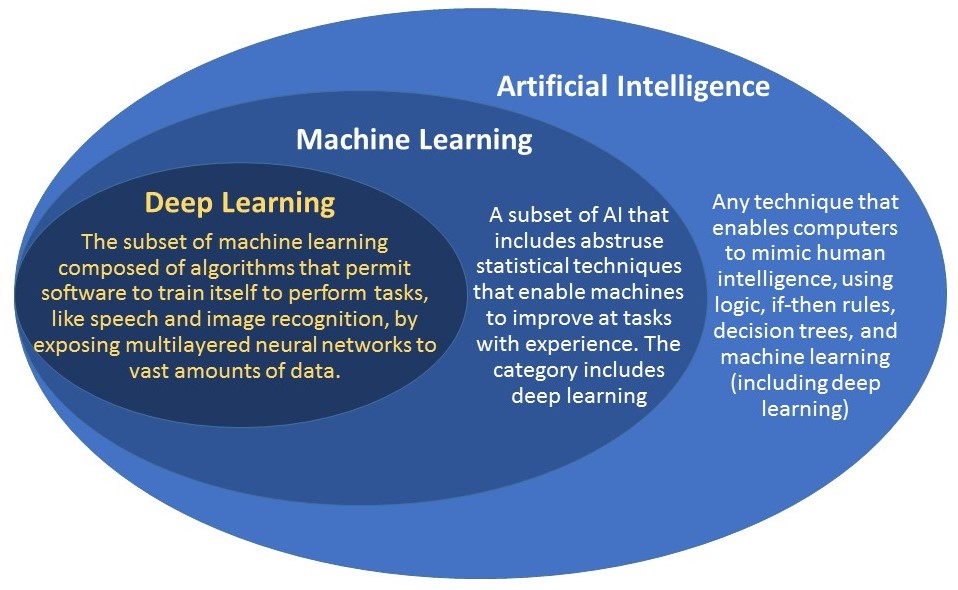 The biggest opportunity for geospatial industry in AI is its core asset, which is geospatial data. It is widely acknowledged that 80% of all data that is generated are spatial in nature. So exploiting that data using automation through AI and deep learning comes naturally to creating solutions for rest of the basic sectors.

AI is a great tool when it comes to imagery analysis. With the world flooded with data from satellites and a myriad of sensors, AI-driven applications can provide previously inaccessible insights on global-scale economic, social and industrial processes.

AI and geospatial intelligence can converge to deliver solutions for improving precision farming, disease prediction, and predictive policing. For the businesses, they can help in planning, predicting demand spikes, identifying high-margin prospects, adding efficiency to the supply chain, and optimizing service delivery. 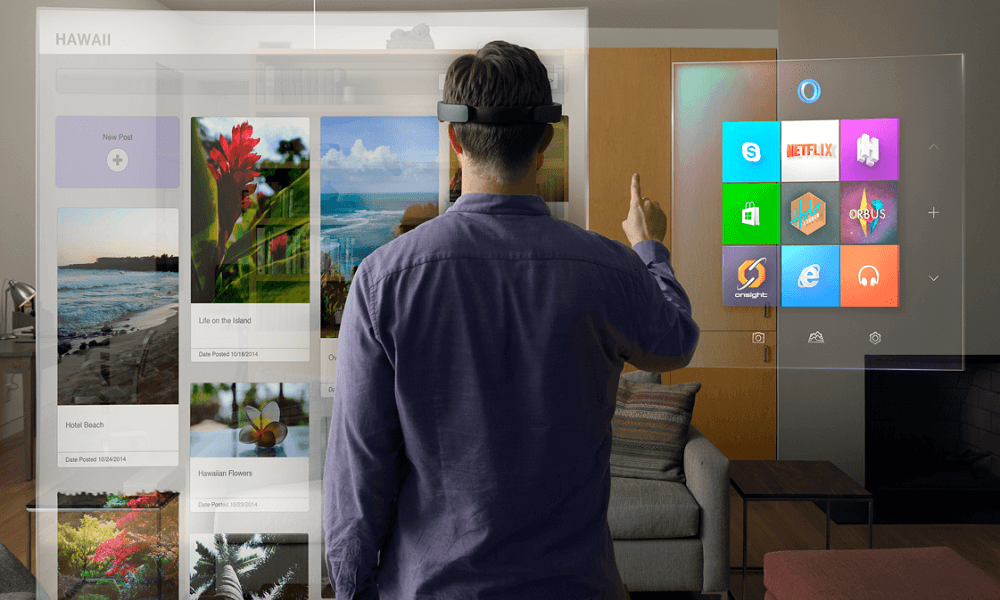 Augmented reality (AR) involves augmenting the real physical world with visuals via computer-generated or extracted real-world sensory input such as sound, video, graphics or GPS data to improve the user experience. Simply speaking, AR supplements your world with digital objects of any sort. Google Glass which is an AR heads, overlays data, 3D objects and video into your vision in some way or another. All this while continuing to let you see the world around you. Airline pilot helmets that display data within the pilot’s view as they fly are AR headsets.

Then there are Spatial Augmented Reality (SAR) systems, which are capable of augmenting real-world objects and scenes without the use of special displays such as monitors or head mounted displays.

A quickly growing area of location-centric technology concerns the development of AR systems that can present digital information to users based on what they are looking at in reality. For example, using AR glasses, you could look at a building on the street and the system could overlay details about who owns the building, the number of occupants, and when it was built. While AR has already made a mark in consumer application areas in geospatial, there is a huge scope of uptake in areas like construction and infrastructure management, or disaster risk analysis and mining etc.

A Blockchain is a continuously growing list of records, called blocks, which are linked and secured using cryptography. The Chain in Blockchain is the chain of transactions in the form of ledger entries about assets which could be money, imagery, data, maps, documents, etc. However, what actually is transacted in reality are tokens containing the metadata of the assets with the actual physical transfer happens separately.

One area where Blockchain will find major use along with geospatial technologies is the Internet of Things. Today, IoT conjures up a mental image of a complex network of humans and objects all passing data to each other. For example, could an autonomous delivery van, which depends on sensors be hijacked and driven to a wrong location? Consider the data carrying the instructions as transactions. If the network is on a Blockchain, then the process of consensus would help validate the transactions and weed out the wrong instructions because the illegal transactions would be trapped.

Other domains where Blockchain could play a role in geospatial terms are land transactions and data repositories.

Also popularly known as UAVs (Unmanned Aerial Vehicles), drones are vehicles that fly or move without an on-board human pilot. Drones can operate autonomously (via on-board computers) on a predefined flight plan or be controlled remotely, and are different from the land-based automated vehicles. 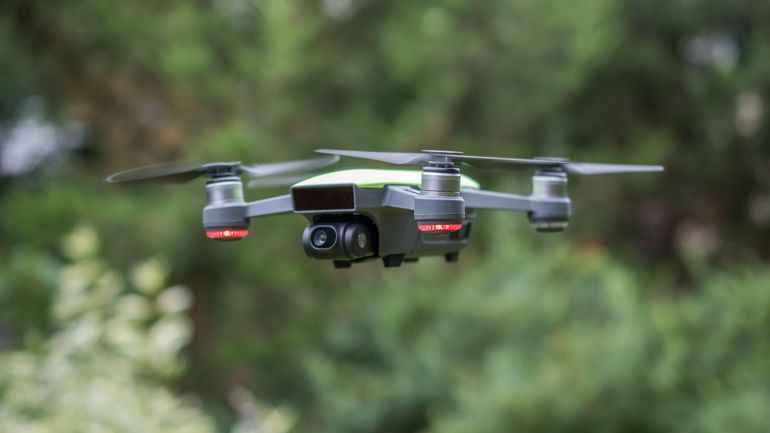 Till a few years back the use of UAVs was always associated with surveillance and war. However, with the demand for timely, accurate, high-resolution and hyperspectral data for mapping, exploring, investigating and monitoring increasing, the pilotless flying machines

have today become an integral part of geospatial industry. The very fact that this flying data collection platform can be managed by a single person and carried in the field has drastically reduced the geospatial industry’s dependence on satellite imagery.

A UAV technically becomes a UAS (unnamed aerial system) once the payload is added, which in the present context are cameras, sensors and detectors — both imaging and non-imaging. The hardware development has been rapid and sensors with very high resolution (both spatial and radiometric) are in the market. The parallel development of software to accept high data throughput and analyze and deliver usable products is in place. 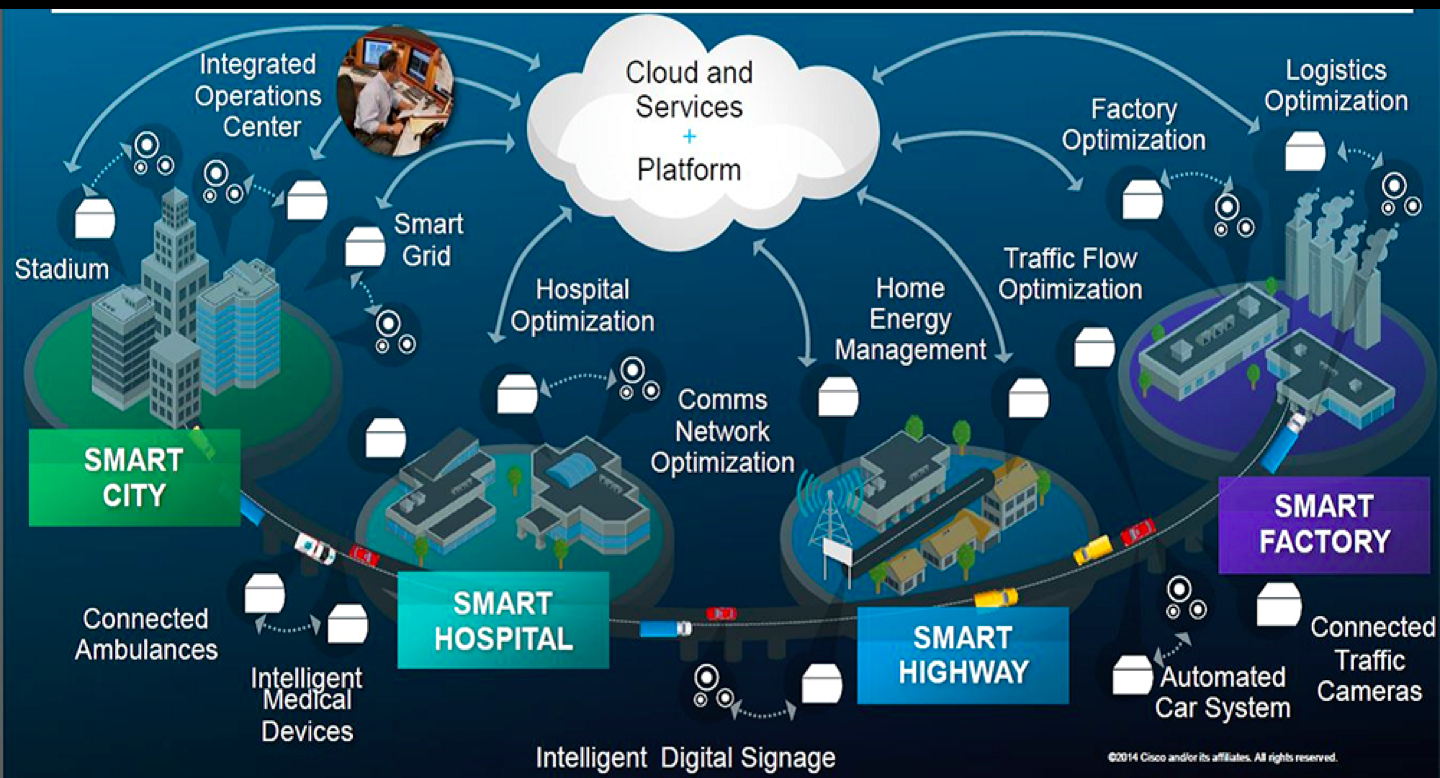 Internet of Things (IoT) was yesterday. Today, we are talking about Internet of Everything. IoT is the inter-networking of physical devices, vehicles, buildings, and other items — embedded with electronics, software, sensors, actuators, and network connectivity that enable them to collect and exchange data.

According to global research report, 50 billion devices, ranging from smartphones and TVs to watches, pipelines and trucks, will be connected by 2020. IoT has the potential to drive huge economic gains, generating up to $11.1 trillion a year by 2025 in global economic impact, it added.

Again, the biggest opportunity for geospatial industry here is data – the fact that 80% of all data that is generated will have a location factor. The interesting intersection of IoT and geospatial Big Data is going to be the ground truth of sensors coupled with the near-real-time modelling of additional visible spectrum data from remote sensing. Big Data, Cloud and Internet of Things are all parts of a continuum. It is hard to think about IoT without thinking about the Cloud, and it is hard to think about the Cloud without thinking about the analytics.

PwC described robots as electro-mechanical machines or virtual agents that automate, augment or assist human activities, autonomously or according to set instructions — often a computer program. 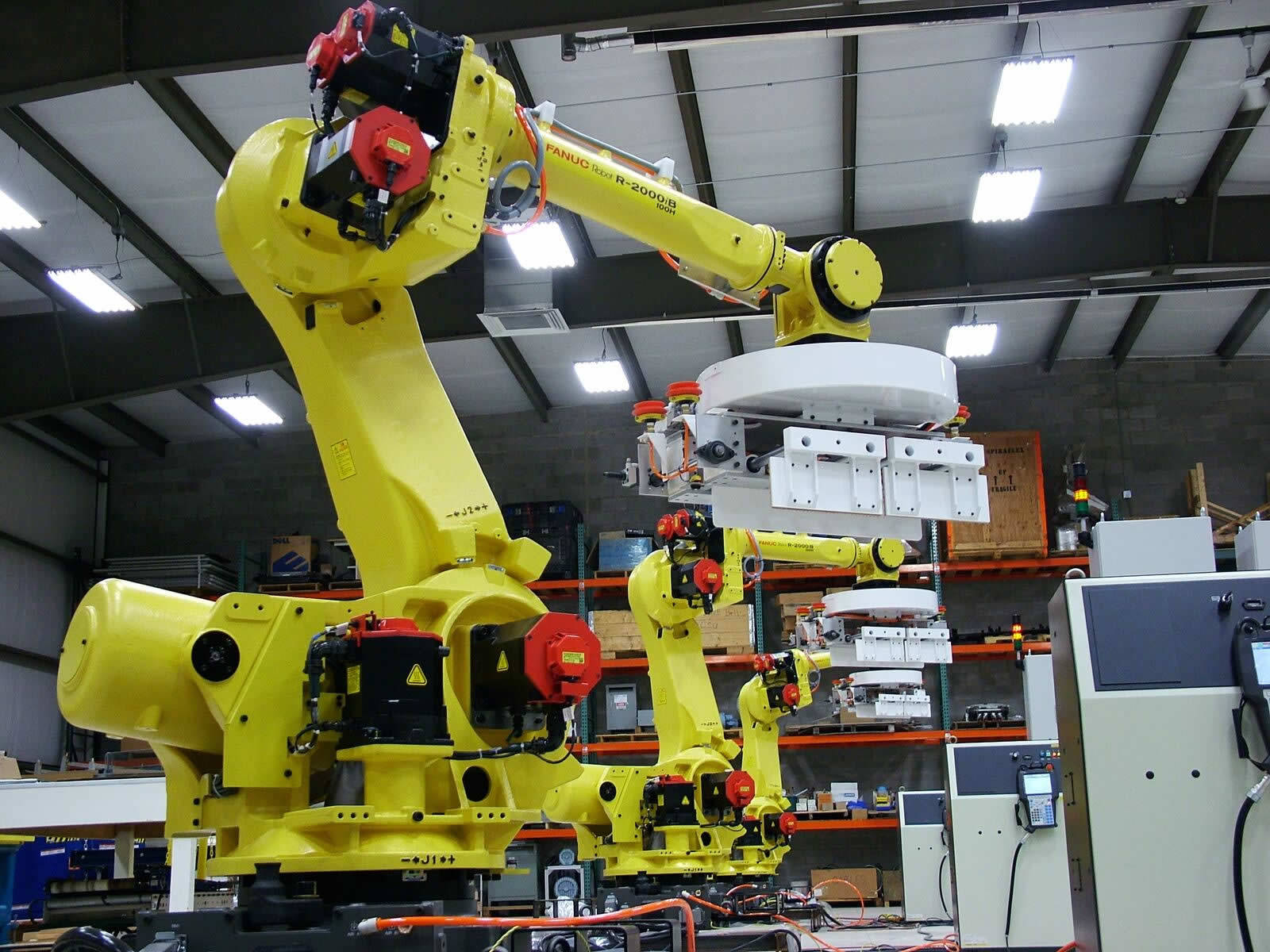 As the debate rages on over whether robotics and automation will take away, the geospatial space too has seen adoption of interactive robots in the public safety and security space. From tactical military situations to routine security patrolling, these machines have the potential to transform traditional security and public safety processes. They are already addressing challenges in risky or complicated operations where continuous human presence is either undesirable or impossible, such as such as mining, engineering systems or utility maintenance. However, automation of remote operations cannot rely on remote control alone. Remote control can only be the first step in any autonomous operation, where gradually more and more work will be automated and the role of the human operator will just be limited to supervising or monitoring largely autonomous operations.

To be noted, drones are also robots, but PwC listed it as a separate technology.

Though often used together, and often used interchangeably, virtual reality is  distinct from augmented reality. While the former is just augmenting or adding to the physical world, VR makes you completely immersed in another world and blocks everything else.

Usually, the effect is created by VR headsets that consist of head-mounted goggles with a screen in front of the eyes. Facebook’s Oculus, Samsung’s Gear or Google Cardboard are all VR devices — they involve looking into a headset with lenses that look at a virtual screen.

Gaming may be the mainstay of VR world, but a host of other industries are waiting to take advantage of this new technology. For instance, in the automotive industry VR has changed processes for design, safety and purchasing. Similarly, in retailing, VR allows stores to showcase everything and also enables customers to test products before purchasing. In sectors like tourism, architecture or construction, the application of VR is but obvious.

In an interesting case, a team of researchers from the European Space Agency at its mission control center in Darmstadt, Germany, are investigating new concepts for controlling rovers on a planet and satellites in orbit. One approach is to assess the latest developments in AR and VR, and how they can be applied to the stringent operational and safety requirements of spaceflight, both robotic and human.

The Esri CityEngine released last year allows urban planners, architects, and GIS professionals to quickly create VR experiences on mobile devices. These experiences can be viewed in a free ArcGIS 360 VR app that is available from Esri Labs.

3D printing is the additive manufacturing technique used to make three dimensional solid objects based on a digital model. Though available since the 1980s, it is only in the past decade it has come to the fore as the varied range of new 3D printing (3DP) products has convinced businesses that the technology could prove a real game changer.

3D visualization on computer screen does enhance the human understanding of the spatial aspects of a physical environment where many thematic concerns interact, but the limitations of a computer screen can be overcome with real 3D models. GIS applications for various sectors produce a lot of thematic data which can be 3D printed so that to expedite the process of discussions or negotiations and enhance the mutual understanding among the different stakeholders. Whether in emergency response or military planning, urban planning, or educating students, 3D printed GIS models can revolutionize the way geospatial data is used and communicate with.

In addition, 3D printing is transforming the satellite and space industry as well. From complex engine parts to cabin interiors, aerospace companies are turning to the capabilities of 3D printing to produce better performing parts for their commercial aircraft and/or spacecraft. For instance, SpaceX is using 3D printing to create a high-performing rocket part for Falcon 9 of superior strength and ductility as compared to a traditionally cast part.

NASA has a 3D printer aboard the International Space Station for, what it calls an on-demand machine shop in space, a critical enabling component for deep-space crewed missions and in-space manufacturing.

WATCH THIS VIDEO ON GEOSPATIAL AND FOURTH INDUSTRIAL REVOLUTION