A Geographic Information System (GIS) is designed to capture, manipulate, store, analyze, and manage data. It is an extension of cartography — the science of making maps — and allows individuals to visualize, analyze, question, and interpret data. Interested parties can use GIS to understand relationships, trends, and patterns better. Throughout this article, we will be assessing GIS History as a point of interest.

A GIS is like a cartographic document in the sense they both contain examples of a base map, where additional data has been added as necessary. There is no limit to the amount of data that can be added to a GIS map, which capitalizes on analysis and presents data in support of arguments.

The Beginnings of Spatial Analysis

The first application of the concept was in 1832 when Charles Picquet created a map representing cholera outbreak across 48 districts of Paris. This map was an early version of a heat map, which would later revolutionize several industries. 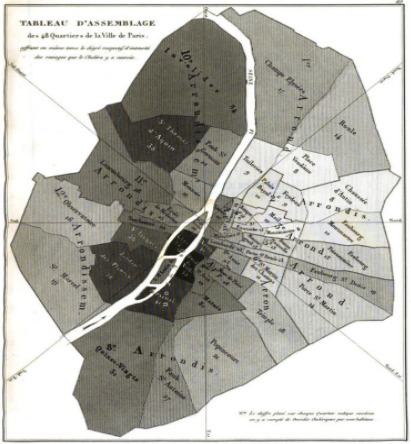 Inspired by Picquet, John Snow adopted the same principle to depict cholera deaths in London in 1854. He evolved the concept by presenting an argument developed from a spatial analysis of data. 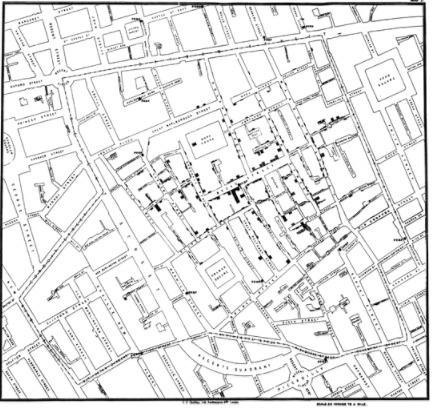 In the early 20th century, a printing technique called photozincography was introduced, which allowed users to separate layers from a map. This meant different themes could be printed, but this did not represent a full GIS since there was no opportunity to analyze mapped data.

When was the term GIS first used?

In the early 20th century, a printing technique called photozincography was introduced, which allowed users to separate layers from a map. This technology meant different themes could be printed, but it did not represent a full GIS since there was no opportunity to analyze mapped data.

The concept of GIS was first introduced in the early 1960s, and it was subsequently researched and developed as a new discipline. The GIS history views Roger Tomlinson as a pioneer of the concept, where the first iteration was designed to store, collate, and analyze data about land usage in Canada.

The second phase of development in GIS history occurred throughout the 1970s, and by the 1980s the concept progressed as national agencies adopted it, and invested parties began determining best practice. By the late 1980s, there was a focus on improving the usability of technology and making facilitates more user-centric.

There is little widespread information available on how the technology has been adopted and deployed. Those pursuing development in the field of GIS had different goals, meaning there was no set direction for research to follow. A single path finally surfaced when GIS became the focus of commercial activity with satellite imaging technology. Mass applications were thus initiated for business and private use.

As the system continuously advanced in Canada throughout the 1970s and 1980s, by the 1990s it was driven by mainframe hardware, with data sets from the entire Canadian landmass.

Throughout the 1990s, software company Esri released ArcView, a desktop solution for mapping systems. The influx of the Internet saw widespread adoption of GIS heading into the millennium, and the technology reached governmental authorities.

Many companies, such as Nobel Systems, adopted the technology to provide services to cities, municipalities and private organizations to manage assets in the field, gather business intelligence, and easily send data to the company headquarters to analyze.

The focus shifted to sharing data across multiple platforms, and if the history of GIS is anything to go by, the industry will continue to debate how to resolve problems arising from data ownership.

Businesses are less inclined to share data and join the growing trend, deterred because their data might provide a commercial advantage for others.

Why is GIS Important in Urban Planning?

GIS technology is commonly used in urban planning, and dramatically impacts the people who live in areas where the technology is used.

Multiple factors provide significant benefits, which help with the development of an efficient and organized city. It allows for multilayered mapping, where each layer includes a different type of information.

Water companies, utilities, and municipalities use GIS to manage and operate assets. Water line breaks are more easily identified and reported via GIS systems, such as Nobel Systems GeoViewer, and cities publish GIS maps for the public to access information about shutdowns, and upcoming energy line or water line work.

The City of Hesperia uses Public View, a GIS application, for the community to identify bus stops, parks, bike routes, and local schools.

Businesses can also use GIS as a tool to decide whether they should open up shop in a given location. Customer-provided data can help companies to determine where prospective customers will come from, and this has been a distinct application throughout GIS history.

Insurance companies can use information extracted from GIS, to determine higher premiums for high flooding areas, and businesses can assess whether customers will use their store given its location.

The Future of GIS

4D mapping is a logical step for GIS, and this will help with urban planning.

Geographic information systems are powerful tools used in modeling, analysis, and various other applications. Not only is GIS essential for developing an urban area, but it is also necessary for today’s fast-moving, technological landscape.

This article was first published by Nobel Systems.

What is GIS? The definition has changed!

How GIS is enabling the agricultural sector