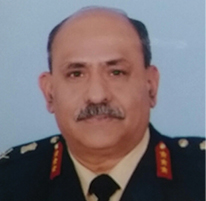 With advancements in technology, and at a time when data and information is more important than valor to win a war, do you think the role of DGIS has changed over the years?

The role of Directorate General of Information System is to realize the Net Centricity vision of the Indian Army through synergized implementation of all Information System Projects. As part of this charter, the directorate is on a fast track to transform the Indian Army into a fully net centric force by end of 13th Plan. However, challenges do arise because of disruptions and emergence of new technologies. The DGIS is fast adapting to these challenges by carrying out internal restructuring of the organization. Agility is an important criteria required to overcome the disruptions that are taking place in technological space. We at DGIS are striving to become more agile in our approach while developing and fielding Info systems. The directorate is constantly embracing new technologies to further improve the situational awareness and enhance the decision-making of the Commanders.

The role of geospatial data and technologies in geo-intelligence is undisputed and well established. How has DGIS used the new technologies as part of its workflow to empower the Indian Armed Forces?

Geospatial data and technologies form a crucial component of our information systems. The spatial data will be ingested in our systems through the Defence Series Maps. Also, the information will be updated directly by field formations and then will be provided to our Decision Support Systems. Like any reckonable army, various technologies like 3D modeling, flythrough, heatmaps of various incidents, etc. have been incorporated into our Decision Support Systems. Assistance from DRDO, CAIR, SAG is being sought and best industry practices incorporated along with security requirements while utilizing COTS products.

How would you compare the information system of the Indian Army to the developed world?

Network Centric Warfare (NCW) capability has proved to be an essential component of a nation’s war fighting ability in the present battlefield milieu. We are aware of the manifested benefits of a network centric capability of the US Army in ‘Op Iraqi Freedom’ and ‘Operation Enduring Freedom’ that resulted in successful Joint Operations against Iraq and Afghanistan. Concentrated efforts are being made to realise the network centric vision of the Indian Army.

Today, we stand at the cusp of being 100% network enabled and vigorous efforts are being made to ensure completion in an early time frame. At the same time the systems being developed are secure and state of the art to meet automation requirements of the army. One of the major drawbacks that existed in the past was the development of applications in isolation. Now mechanisms have been put in place to integrate developed applications. Cyber security is another major issue that is being considered with the seriousness that it requires. Necessary precautions are being taken while developing the applications to prevent any cyber breach in the information systems.

How crucial is GIS in your area of work? What is being done in the field of GIS by the directorate?

GIS is an important facet of all Operational Information System (OIS) being developed by the directorate. It is crucial as all geo spatial analysis required for OIS applications are carried out based on the GIS and the processed information is displayed to the Commander. DGIS is in the process of developing OIS applications which are at various stages of development, the key issue being interoperability of data.

Considering the importance of GIS, deliberations are being carried out with leaders in the field of GIS and the issues are marked to the highest level in the army hierarchy. The directorate is presently analyzing options of ensuring interoperability of data thus giving flexibility in choosing the best-suited GIS by the user versus a common GIS for all OIS components, which would give an opportunity to optimize and build a strategic partnership with GIS developer. The directorate is also making efforts towards exploiting the GIS for in-house software development for the OIS application software and is aspiring to make itself as a Centre of Excellence for GIS in Indian Army.

Do you think that the biggest challenge facing any organization is to integrate them with other systems in a seamless manner?

The Tac C3I systems were developed as independent verticals with no provision of exchange of information initially. The major challenges in integration of system are the heterogeneousity of system, and the system being at different stages of development. However,` a seamless integration by leveraging contemporary technologies has been envisioned and achieved when the systems were recently deployed in test bed formations. The future vision is to seamlessly integrate Operational and Management applications through a comprehensive Indian Army Information System (IAIS) which would be an army wide application catering for all operational and peace time functions of the IA. Integration has come to stay in IA. Hence, we have developed in-house capability to leverage APIs for integration solutions.

For an effective NCW, one requires equipment and weapon systems which are network enabled. While the Indian Army is already doing that for its existing weaponry, how is it ensuring that future purchases integrate seamlessly with its existing systems? Does this form a part of its RFP for any future purchases?

Interoperability between the three services is a problem faced by all armed forces around the world. How exactly are you planning to resolve the problem?

The three services have made rapid advances in the field of automation to keep pace with the technological disruptions and derive digital dividends by leveraging contemporary technologies, however, seamless interoperability between the services is still a niche area which requires focused efforts. The vision to achieve a common network and interoperability between tri-service developed systems is under progress. Interactions and joint studies are also being carried out to resolve issues between services on interoperability. Interoperable GIS and APIs/Enterprise Integration Architecture is the way forward.

What do you think is the future paradigm for any organization developing information systems?

Recent years have yielded significant advances in computing and communication technology, with profound impact on Armed Forces. It necessitates the understanding of future paradigm that is going to shape any organization that are involved in development of information systems. In my view, there are seven pillars that are central to successful development of information systems. Firstly, Disruption is a phenomenon that’s changing the way business is being done in digital world. It creates a new market and enhances the value of a product through innovation. We are adopting the technological changes through Agility, by embracing the change and delivering products effectively and efficiency. Another paradigm that we are looking for any future organization is the availability of creative manpower inherent to an organization. These capabilities needs to be tapped by creating opportunities through start-ups and giving them basic infrastructures and resources. Looking into future, dissemination of crucial information to users through apps also needs to be considered by any digital organisation. Future Technologies are being developed and embraced at a fast pace world over. Some examples being Blockchain, Robotics, Artificial Intelligence, Internet of Things (IoT) etc. These technology needs to be incorporated to make the information systems current and efficient. With the explosion of data, Big Data and Analytics are arguably going to be one of the most important technology in the times to come. It can be used to reveal patterns and trends that might otherwise be invisible. Army needs to harness this technology to stay ahead of the competitors’ decision loop. With the proliferation of digital technologies, the associated cyber threats have also increased at all levels. To combat these existential threats, a comprehensive Cyber Security strategy incorporating the recent trends is a security and functional imperative that needs to be developed.

The world’s most geospatial ready countries!