The Open Geospatial Consortium (OGC) is considering CityJSON for adoption as an official OGC Community Standard. A new Work Item justification to begin the Community Standard endorsement process is available for public comment.

CityJSON is a JSON-based encoding for a subset of the OGC CityGML data model, which is an open standardized data model and exchange format to store digital 3D models of cities and landscapes.

CityJSON defines ways to describe most of the common 3D features and objects found in cities (such as buildings, roads, rivers, bridges, vegetation, and city furniture) and the relationships between them. It also defines different standard levels of detail (LoDs) for the 3D objects, which allows different resolutions of objects for different applications and purposes. CityJSON considerably simplifies the storage and exchange of 3D city models.

The purpose of CityJSON is to offer an alternative to the GML encoding of CityGML, which can be verbose and therefore complex to work with. The design objective for CityJSON is ease of use for both reading datasets and for creating them. CityJSON was designed with programmers in mind, therefore tools and APIs supporting it can be quickly built. It was also designed to be compact – using CityJSON typically compresses publicly available CityGML files by a factor of 6x – while at the same time being friendly for web and mobile development.

CityJSON was developed, and is maintained, by the 3D geoinformation group at TU Delft. Others have since joined its development, especially virtualcitySYSTEMS and Claus Nagel.

An approved OGC Community Standard is an official standard of OGC that is considered to be a widely used, mature specification, but was developed outside of OGC’s standards development and approval process. The originator of the standard brings to OGC a “snapshot” of their work that is then endorsed by OGC membership so that it can become part of the OGC Standards Baseline. USAFacts Coronavirus Data Hub and Map Tracking the Daily Spread of the Virus in Every U.S. County Is Now Live 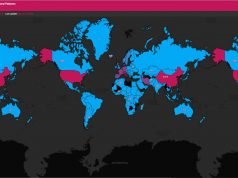