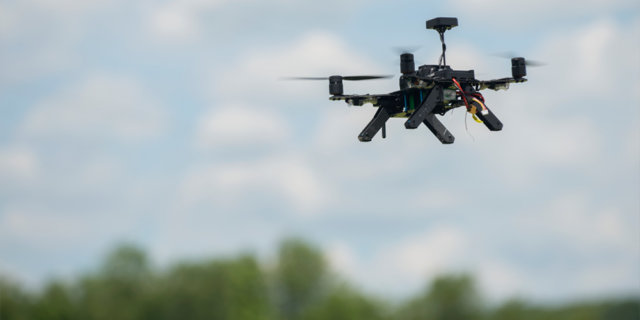 Beyond Visual Line of Sight (BVLOS) is the most talked about thing in the drone industry. Countries around the world are amending their drone policies so that they can allow unmanned aerial vehicles (UAVs) to fly Beyond Visual Line of Sight for maximum efficiency. Unlike VLOS flights, which are operated within the pilot’s line of sight, BVLOS flights are flown beyond the visual range. BVLOS capabilities enable a drone to cover far greater distances.

BVLOS has numerous applications and is cost-effective. It enables service providers to conduct complex drone operations and facilitate drones to fly without any human interference. But, drones have to become ‘airworthy’ to get there. BVLOS flights are mainly performed in infrastructure inventory, for monitoring large areas and creating orthophoto maps.

Drones flying Beyond Visual Line of Sight are controlled by data provided by on-board instruments. Information is transmitted via a telemetry link that informs the operator about the position, altitude, speed and direction of flight as well as all relevant parameters of the aircraft. However, UAVs flying BVLOS can also change flight parameters and control sensors to collect data.

Pilots are trained differently to fly drones BVLOS. They need to have theoretical and practical training to obtain a UAVO qualification certificate with the authority to perform BVLOS flights. During training they acquire knowledge of navigation on unmanned flights, meteorology, flight performance and planning, and flight rules. These are necessary due to the additional capabilities of unmanned system.

Operating drones BVLOS has many benefits. BVLOS allows a drone to collect more data in fewer deployments. Along with it deploying a drone for BVLOS costs less than several traditional methods such as manned helicopters and airplanes. In BVLOS missions, drones can replace traditional long-range aerial data collection platforms such as manned aircraft and satellites. The lower altitude of drone flight makes them ideal for high-resolution data collection. Some operations also need fine control over the timing of data collection and drone flights can deliver this enhanced functionality.

In many cases, drones prevent humans from being placed in a dangerous situation, either removing them from an aircraft or a hazardous area. These areas can be inaccessible for a ground crew, and are often outside VLOS.

While BVLOS flight is already legal in some countries with certain restrictions, it is not yet allowed in the United States without a hard-to-get waiver from the Federal Aviation Administration (FAA). To date, more than 1200 BVLOS waiver applications have been submitted by commercial drone operators. Of these, 99% have failed to earn a permit.

The most pressing challenge facing the drone industry is regulation. As with many industries, drone technology is developing much faster than the regulatory bodies can keep up.

Here, the cautious, risk-averse nature of the aviation industry is in sharp contrast to the speed of innovation. Yet it is precisely the FAA’s conservative nature and careful regulations that have made the airspace above the United States one of the safest places in the world.

The FAA’s main concern is uncontrolled flying that puts lives and vital infrastructure in danger. The agency must be assured that drones sharing the sky with airplanes will not result in midair collisions, and that the risk of damage to people and property on the ground is mitigated.