Today, December 10, is the Human Rights Day. As armed violence across the world rose drastically through 2015-2016, arms trade is increasingly being seen as a major cause of human rights abuses. From sophisticated weapons finding their way into the hands of terrorist organizations to governments using them against its own citizens, to cross-country wars, increased violence around the globe is threatening every sphere of human lives today. Although these are legal arms deals sold to legitimate governments, a number of times they pass onto hands of dreaded militants like the ISIS or Al Qaeda — by mistake or after the defeat of a goverment force. Often regimes like the Saudi Arabia and Qatar are said to be arming the extremist forces to further their political cause.

A definitive figure for the value of global arms industry is difficult to calculate. In 2012, Stockholm International Peace Research Institute (SIPRI) estimated that military expenditures were roughly $1.8 trillion annually. And it has only gone up leaps and bounds since then, far eclipsing the Cold War levels, despite a growing call for peace, and putting an end to America’s often-hostile and mis-adventurous foreign policy approach.

US, Russia, and China are the world’s largest arms exporters. In fact, according to SIPRI, the biggest change is China in the global arms exporters list was China, accounting for 5% of the arms trade in 2010-2014. France and Germany bring up the rear in the top five list.

Among the importers, India remains the world’s largest weapons importer over a five-year period. However on an annual basis India ceded its top spot to Saudi Arabia in 2015.

We put together a series of maps to show how the global arms industry looks like — who is selling, who are the end buyers.

China’s aggressive growth in the arms manufacturing and exports has catapulted it to third place from a lowly 8 in 2006-2010. It currently has around 5.9% market share compared to 3.6% in 2006-10. Chin’s  top clients include Pakistan (35%), Bangladesh (20%), Myanmar (16%) Incidentally, China maintains the world’s largest standing army with 2.3 million troops.

If we look at the importers, most of these are being imported in Asia with India, which has its share of hostile neighbours and armed internal insurgency, topping the charts, with Saudi Arabia, China, UAE and Australia making the top 5 list.

Interestingly, India remains the world’s largest weapons importer over a five-year period according to the SIPRI data on global arms purchases.  However on an annual basis India ceded its top spot to Saudi Arabia in 2015. 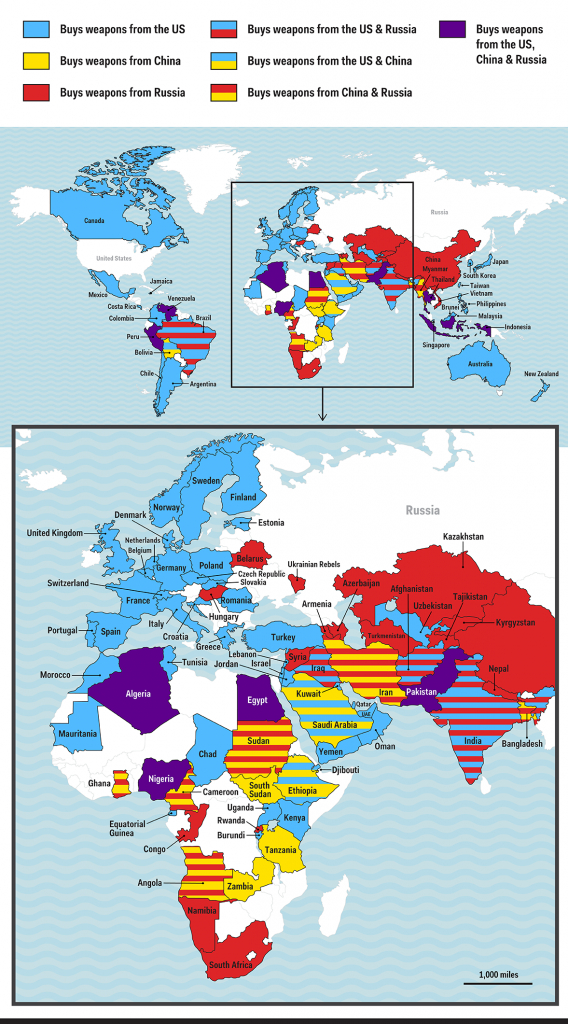 Data: SIPRI; infographic courtesy Business InsiderThis further detailed infographic gives an idea of where all the arms are coming from and where they are going.