Recycling isn’t just for plastics! SpaceX is doing it with spacecraft. And routinely.

This time it flew a re-used spacecraft to the International Space Station and got it back. Of course all in one piece. Or what did you think?!

While SpaceX has been returning the Dragon capsules routinely back on Earth via splashdowns in the ocean, this is the first time that one of those has completed a second re-supply mission. Until now, no non-SpaceX spacecraft has visited the ISS and returned; they are designed to burn up in the atmosphere after a single flight.

SpaceX is making a habit of breaking barriers. While it has almost perfected the art of returning the first stage of its Falcon 9 rocket after launches, this year it used those recycled Falcon 9 rockets twice. On March 30, the Falcon 9 rocket that launched the SES-10 commercial communications satellite from NASA’s Kennedy Space Center used a first stage booster that was first employed during a mission to send a Dragon spacecraft on a commercial resupply mission to the International Space Station in April 2016. The Falcon 9 that launched the BulgariaSat-1 mission in orbit on June 23, was recovered and recycled after an Iridium Communications mission in January 2017.

In both cases, SpaceX was able to recover the first stages once again, thus keeping open the possibility of their further use in future. The June 23 recovery was also the most challenging successful landing so far for SpaceX, because of launch conditions. Interestingly, this Falcon 9 was the first rocket that SpaceX managed to land without explosions.

The Dragon capsule was also launched from a SpaceX Falcon 9 rocket to deliver supplies and equipment to the ISS as part of SpaceX’s 11th mission to the space station.

After unloading the Dragon, the station crew re-packed it with experiment samples and other stuff. The Dragon is returning with more than 1,860 kg of cargo, most of which are samples, gear and other parts of various scientific experiments performed on the space station. One of these experiments will gauge the effectiveness of a drug that could be used to treat osteoporosis.

As the spacecraft was released from the ISS, it re-fired its braking rockets and plunged back into the atmosphere, creating a blazing trail visible from the space station, prompting American astronaut Jack Fischer to tweet a photograph: “Beautiful expanse of stars — but the ‘long’ orange one is SpaceX-11 reentering! Congrats team for a successful splashdown & great mission!”

Fischer had earlier tweeted his excitement praising the Dragon: “I could even say it was slathered in awesome sauce. This baby has had almost no problems, which is an incredible feat considering it’s the first reuse of a Dragon vehicle,” said. “And the science we’ve done — oh my, the science. Most of the 6,000 pounds of cargo carried was science, and almost all the return cargo are precious samples for discoveries we can’t wait to see.” 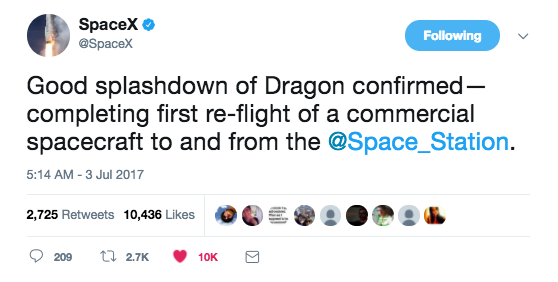 The Dragon finally splashed down in the Pacific Ocean shortly after 5.10 am PT. “Good splashdown of Dragon confirmed completing first re-flight of a commercial spacecraft to and from the @Space_Station,” SpaceX tweeted. After unloading the cargo, the craft will be returned to the SpaceX test facility in Texas.