Orbital ATK will start manufacturing NASA’s Landsat 9 now after its comprehensive design for the satellite received a go-ahead last month. Besides design and manufacture, Orbital ATK will also integrate two science instruments on the spacecraft, support the launch, and help in early orbit operations and on-orbit check-out of the observatory. The Landsat 9 spacecraft will be manufactured and tested at Orbital ATK’s Gilbert, Arizona, facility and is currently planned for launch in late 2020. It is a joint mission between NASA and US Geological Survey, and the latter would operate the satellite once it is in orbit.

Representatives from NASA were present at the Critical Design Review (CDR) from February 26 to March 1 at Orbital’s Arizona facility and concluded that the program meets all technical performance measures and requirements. This will be the fourth Landsat satellite to be built by Orbital ATK. It had earlier built Landsat 8, which was launched in 2013 and is providing high quality images in quantities that surpass mission requirements. Before that, Landsat 4 and Landsat 5 (launch year 1982 and 1984)  were built by GE Space Systems Division, based on a Multimission Modular Spacecraft design originally developed by Orbital-aquired Fairchild Space and Defense. 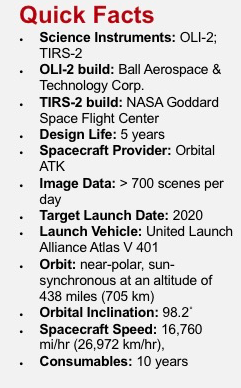 Landsat 9 will extend the length of the overall Landsat series to half a century, providing the longest continuous record of the Earth’s surface as seen from space. Landsat 9 is based on Orbital ATK’s flight-proven LEOStar-3 spacecraft bus platform, which was also used on Landsat 8. The Ice, Cloud and Land Elevation satellite (ICESat-2) and the Joint Polar Satellite System (JPSS-2) spacecraft are also based on the LEOStar-3 bus platform and currently in production for NASA at Orbital ATK’s Gilbert facility.

Landsat 9 will continue the Landsat program’s critical role in monitoring, understanding and managing the land resources needed to sustain human life. It is a rebuild of Landsat 8 to enable a quick launch. Each each day Landsat 8 adds about 700 new scenes and in four and half years of existence, Landsat 8 has already added over a million images to the archive – which is 14.8% of the entire 45-year Landsat data collection.

Meanwhile, scientists and engineers are busy building the two scientific instruments that will fly aboard the satellite. One of these instruments is the Thermal Infrared Sensor 2 (TIRS-2) which is being built at NASA’s Goddard Space Flight Center in Greenbelt, Maryland. It is a thermal sensor that will be capable of taking measurements in two sections, or bands, of the thermal infrared portion of the electromagnetic spectrum, enabling land surface temperature measurements to be made.

The instrument uses the same technology as its predecessor, Landsat 8’s TIRS instrument, exploiting principles of quantum physics to make measurements of long-wave (thermal) infrared energy. TIRS-2 will have a five-year design life as opposed to the three-year design life of its first version TIRS. There have also been strategic optical design changes to avoid the stray-light issues that have complicated measurements made by Landsat 8’s TIRS. TIRS-2 uses a four-element refractive telescope that focuses an f/1.64 beam of thermal radiation onto a focal plane that is cryogenically cooled. The TIRS-2 focal plane holds three modules with quantum-well-infrared-photodetector (QWIP) arrays arranged in an alternating pattern along the focal plane centerline.