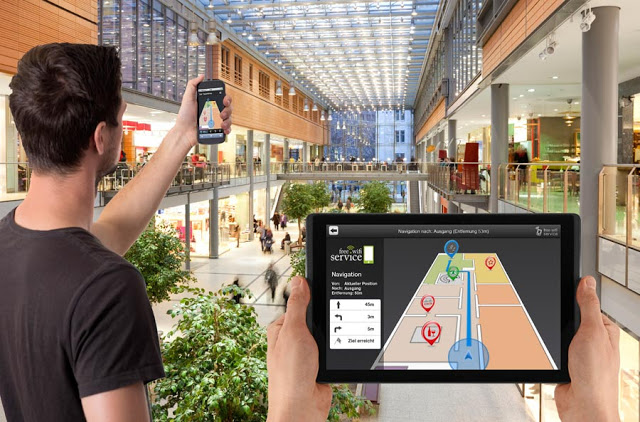 What do you inside a building when your GPS stops working? You switch to indoor navigation or indoor positioning services.

The newest kid on the geospatial block, indoor positioning is a still evolving field. It combines the power of GPS and precise mapping to the place where human beings spend 70% of their time – indoors. According to the United States’ National Geospatial Advisory Committee (NGAC), indoor positioning services provide the ability for real-time tracking of location information on people or objects indoor using sensory information from automated devices. Naturally, in a world of increasing customer intimacy, venue-based marketing strategies and increasing demand for location-based services and application by smartphone users, the rise of indoor positioning services (IPS) is but obvious.

What is indoor positioning?

Indoor positioning can be broadly classified into: Magnetic positioning, SLAM, radio waves, mobile sensors, RFID. However, it must mentioned that there is no standard way to build an IPS. A company may use WiFi Triangulation, Bluetooth, Beacons, Near Field Communication (NFC), infrared, indoor mapping, sensors or even acoustic analysis LED lighting, and “pedestrian dead reckoning,” among others to determine a person’s position in a building. And since no one technology is ubiquitous, companies are using multiple technologies in their products.

The global indoor location market is estimated to touch $40.99 billion by 2022 from $5.22 billion in 2016 at a Compound Annual Growth Rate (CAGR) of 42.0% during the forecast period. Moreover, retailers are expected to spend $2.4 billion annually on beacons and asset tracking in 2020. It’s no surprise then that there are hundreds of startups competing for visibility in the emerging  indoor location and proximity marketing arena.

Magnetic positioning was inspired by animal way-finding in nature. Just as animals rely upon the Earth’s magnetic fields to locate themselves in relation to their destinations (e.g., migratory breeding ground), smartphones can similarly be used to detect and respond to magnetic field variations inside buildings.

The magnetic sensor data from a smartphone is used to wirelessly locate objects or people inside a building. It uses Earth’s geomagnetic field to pinpoint the exact location inside a building and is being used to offer positioning accuracy of 1-2 meters in indoor environments. By far it is considered to be the most complete and cost-effective in indoor positioning since it offers accuracy without any hardware requirements and a relatively low total cost of ownership. Magnetic positioning is said to emerge as a “foundational” indoor location technology.

Magnetic fingerprints can also be crowdsourced. For instance, store staff, volunteers or just common people could generate magnetic fingerprints for indoor spaces simply by using an app on their smartphones. Google’s Waze is one of the best examples of this.

Acronym for Simultaneous Localization and Mapping, SLAM, could also be used to scale the technology without explicit indoor fingerprinting. The technique behind robot mapping or robotic cartography, SLAM is the process of creating a map using a robot or unmanned vehicle or a sensor that navigates that environment while using the map it generates. It’s the same approach used to build maps when there’s no or little pre-existing knowledge of a place. SLAM is applicable for both 2D and 3D motion.

Radio Frequency Identification, more commonly known as RFID, is a simple technology that comprises of a tag and a reader. The reader uses radio-frequency electromagnetic field to read the data in the tag and get the identification of the object the tag attached to. The tag can either have battery or not which makes it an active tag or a passive tag. Though suitable for only selective object identification, RFID is often used in combination with other technologies for precise indoor location.

The RFID market, which is set to touch $28.5 billion by 2023, growing at CAGR of 7.7% from $16.95 billion in 2016, = has become a force in the retail space. It has scope for a fantastic growth particularly in apparel and shoes space, while great potential in other markets such as healthcare and automotive.

Bluetooth Low Energy (BLE) signals from battery-run beacons (small wireless devices) is one of the latest technologies in the IPS toolkit and become an industry standard available on most devices today. The device detects the signal from the beacon and can calculate roughly the distance to the beacon and hence estimate the location. Bluetooth beacons fast emerging as an agile and portable solution to providing context for tracking and communication. The global  Bluetooth beacon market expected to reach $58.7 billion by 2022, growing at CAGR of 95.3%.

The key factor driving the industry growth is the increased number of applications powered by beacons and BLE tags. Beacons are witnessing growing penetration across asset tracking and machine/equipment status observation in high volume verticals. At the same time, the markets for both existing and new applications are maturing, leading to larger roll-outs. Growing integration of beacons in cameras, LED lightings, point of sale (POS) devices, digital signage, and vending machines is expected to propel the industry growth over the forecast period. Apart from retail applications, beacons are also projected to become a common commodity in industrial applications.

The wide availability of sensor-rich mobiles has boosted the possibility for accurate of indoor positioning services. In addition to sensors like GPS (which usually doesn’t work indoors but if there is satellite signal the smartphone can determine its position) and Bluetooth, modern day smartphones are equipped with a variety of sensors like barometer (which can measures barometric pressure and thus can provide information about the floor level the smartphone is on), acceleration sensor (which can measure force shift on the axes X, Y and Z when the phone is being moved); gyroscope (which can detect if the orientation of the smartphone is vertical or horizontal), mobile phone antenna (a rough position of the smartphone can be detected via GSM); Near Field Communication (NFC is a radio standard with a maximum range of 10 cm and is being used for contact-free payment by AndroidPay and ApplePay), and camera (the smartphone cameras receive visible light communication signals and can be used for virtual reality applications).

While none of these in isolation can provide accurate location, a combination of the sensor data can be used for precise positioning.

WiFi can be used in a similar way as BLE beacons and can be used to determine position with an accuracy of 5-15 meters. However, though its signal is stronger and can cover more distance than BLE, it requires an external power source, more setup costs and pricy equipment. Further, WiFi signals can be impaired by objects, such as the human body, walls. Even opening and closing of doors can affect WiFi signals.