So what do location tech and soccer got to do with each other?

If you were an English fan, you would have been furious when the team was not allowed a goal against Germany in FIFA World Cup 2010. I wasn’t because I was supporting Germany.

But jokes apart, the English team was down 2-1 when midfielder Frank Lampard looked to have equalized in the 39th minute. However, Uruguayan official Mauricio Espinosa failed to spot that Lampard’s long-range drive had bounced at least a foot over the goal line. England ended up losing the match 4-1, but the controversy that followed changed soccer forever.

FIFA was compelled to introduce goal-line technology for Brazil World Cup 2014, something it was resisting for years on grounds that use of too much technology slows down the beautiful game. Just five days into the Russia 2018,  and we have already seen teams benefitting from the technology. Last week’s France Vs Australia and Spain Vs Portugal were cases in point.

What exactly is goal-line technology?

Goal-line technology or GLT is the use of technology to determine if the ball has crossed the goal line or not. This information is transmitted within a split second to a special watch worn by the referee to ensure immediate response and that there are no stoppages or other forms of interference in the game. Match officials are the only ones to receive a signal. Viewers can see replay if the match organizers decide to show it. 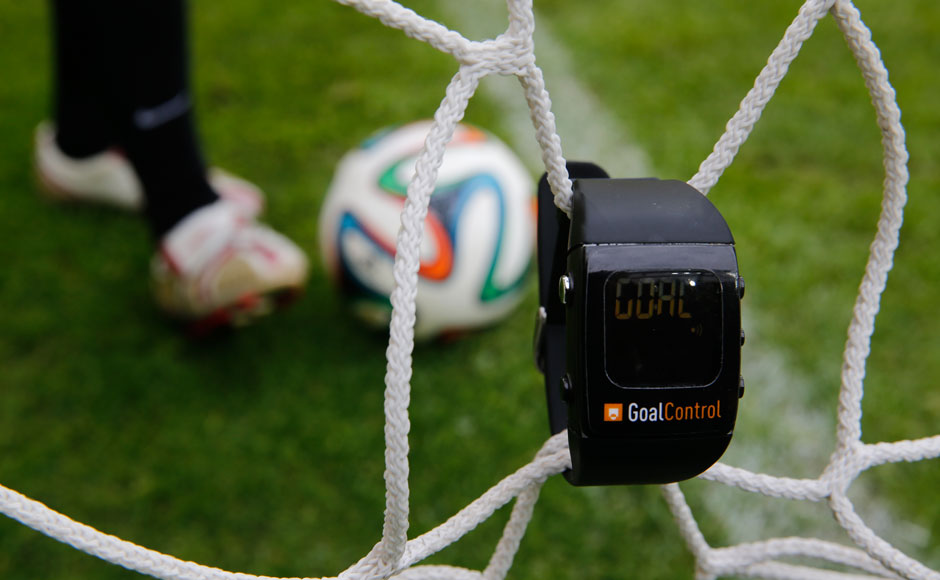 Compared to use of similar technology in other competitive sports, GLT is recent addition to soccer. It was only in July 2012 the International Football Association Board approved the use of goal-line technology provided it does not interfere with the game. Following this, the technology was adopted to be used in FIFA Word Cup in Brazil in 2014. As FIFA maintains, the objective of GLT is not to replace the role of the officials, but rather to support them in their decision-making.

Because of its high cost, the technology is used only at the highest levels of the game. Other than FIFA World Cups, GLT is used the top European domestic leagues.

What are the technologies being used?

Camera-based: Heard of the Hawk Eye technology for cricket to decide on third umpire rulings? Camera technology has been widely used in other sports, especially cricket and tennis for more than a decade now, but it has taken off in soccer only recently.

FIFA currently uses the GoalControl-4D system for the World Cups. There are 14 high-speed cameras located around the pitch, with seven cameras focusing on each goal to detect the ball’s exact location around that area. A software automatically analyzes all the footages to calculate the ball’s position as X, Y and Z coordinates plus speed, making it 4D. If the ball fully crosses the goal-line, the computer automatically sends an signal to the referee’s watch in less than one second.

The computer uses triangulation method to calculate the ball’s precise position. Triangulation is a geometrical method of calculating the position of an object by measuring a network of triangles. The process involves measuring the length of one side of each triangle and then deducing its angles and the length of the other two sides by observation from this baseline. The system software then creates a 3D image of the ball relative to the goal line by calculating the ball’s location in each frame by identifying the pixels that correspond to the ball.

Camera technology via triangulation produces highly reliable results even when player’s bodies are obstructing the views of some cameras. Because only three cameras are required to implement triangulation, even if the view of a few cameras is hindered, the others can take over seamlessly.

This technology has been developed by German technology giant Cairos Technologies AG in partnership with Adidas. The ball, which was specially designed by Adidas, has a suspended delicate sensor inside it that can withstand vigorous kicks.

The sensor inside the moving ball disturbs the magnetic field around the goal mouth. This signal is then transmitted grid to a computer which decides whether the ball fully crossed the line or not. An affirmative answer is immediately followed by a goal alert on the referee’s watch. However, FIFA or top soccer leagues are yet to use this technology widely since there have been doubts over its accuracy.

Check out satellite images of all the 12 FIFA 2018 stadiums