More than ever before, decision makers understand the power and value of geography and location data. Today, decision-makers want to see the distribution of their customer base on a map, in relation to other demographic and socioeconomic data, says Deirdre Bishop, Chief, Geography Division, U.S. Census Bureau, in an exclusive interview with Geospatial World.

Does GIS help in understanding and analyzing urban-rural divides and land use patterns more accurately?

GIS and related computing and database technologies have enabled us to tabulate and analyze data at more precise levels of spatial resolution. In addition, they have eased the ability to manage larger amounts of demographic, economic, and land use/land cover data to map settlement patterns as well as social and economic relationships between communities. As a result, we are now able to measure and define different types of urban and rural landscapes at a variety of geographic scales. We can easily define urban areas at a census block level based on population density and other land use/land cover measures. We can define functional relationships between urban and rural areas based on commuting patterns at the census tract level, providing insight into which rural areas are linked to large urban centers or to smaller urban areas. We can also measure the relative isolation of rural communities based on the amount of time it takes to drive to urban areas of various sizes. None of this was easy, if even possible, without GIS.

In the 2020 national census, US Census Bureau would be using GIS for the first time. Do you think this would make the 2020 census most comprehensive and with the highest number of respondents?

This decade, the Census Bureau will make it easy to respond – anytime and anywhere. As part of the Internet response option, the Census Bureau will allow users to respond by simply entering their address (unlike past procedures when a questionnaire pre-printed with a unique identification code was required). The respondent’s address will then be matched to the Census Bureau’s Master Address File. In most instances, an automated match will occur.  In fewer instances, a more intensive matching and/or clerical review process will validate the address and associate it with the correct geographic location on the ground.  This process ensures the Census Bureau counts everyone once, only once, and in the right place.

US Census Bureau has designed an interactive mapping tool called ROAM(Response Outreach Area Mapper). How do you plan to use it during the census and how would it boost the response of participants?

In preparation for the 2020 Census, the Census Bureau will hire approximately 1,500 partnership specialists to engage with the communities and teach them about the importance of the census. Partnership specialists around the country will use ROAM to do two basic things. First, they will use its national map of census tracts to locate areas of predicted low self-response—those will be displayed in increasingly darker shades. Second, they will use its underlying American Community Survey data to learn more about the people and households in these areas. Using this combination of information, partnership specialists will make smart decisions about where to conduct outreach and what strategy may be the most effective to encourage people living in those areas to respond to the 2020 Census. 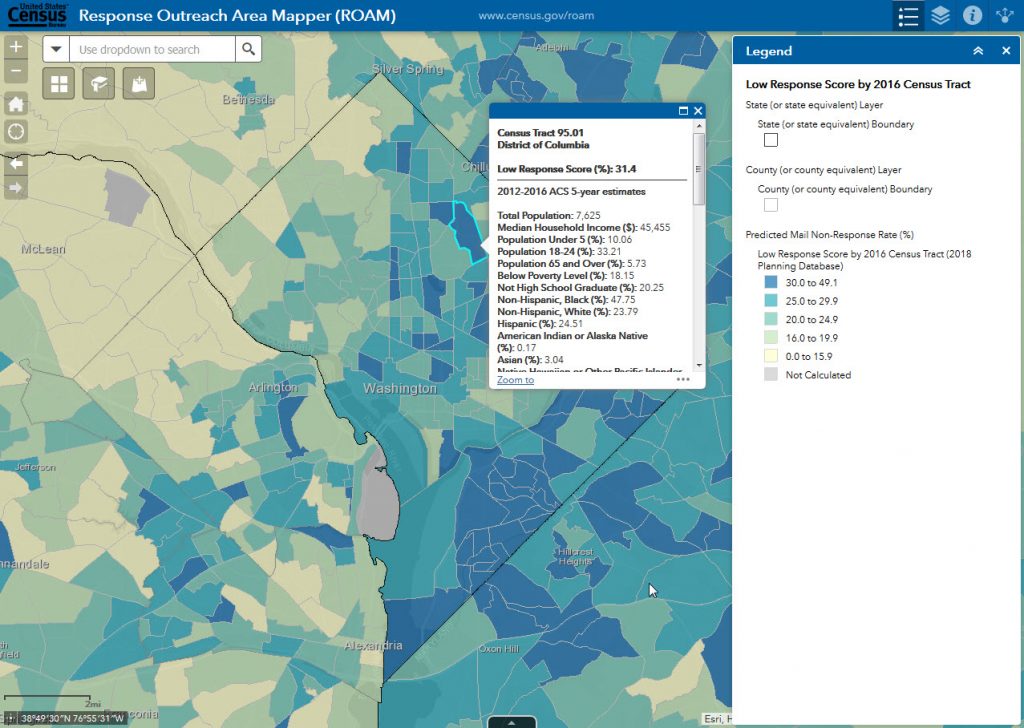 Demographic profiles are measured in a census which is then used by government agencies, policymakers, statistical researchers and others. Would the use of GIS lead to more accurate and reliable information, and what is the main purpose behind incorporating GIS and spatial technologies in the 2020 survey?

Traditionally, demographic profiles have provided a simple and standard way to share census data with data users. For example, a popular product from the last decennial census is the DP-1 Profile of General Population and Housing Characteristics: 2010. This profile shows the total population of the United States by age, sex, race, relationship, and housing characteristics such as occupied and vacant housing units. While it is helpful to see this type of information in table format, it is even more useful when the data is displayed in a map. Incorporating GIS and spatial technologies into the Census Bureau’s 2020 Census data products plan will allow for the integration of statistical and spatial data in an accessible and usable format. This will provide government officials, policymakers, and statistical researchers with an additional tool to analyze census data and make informed decisions.

TIGER (Topologically Integrated Geographic Encoding and Referencing) is a US Census tool that has a comprehensive database of roads, rivers and other relevant topographical information. Could you elaborate a bit on how the TIGER tools were designed and can they be integrated with Esri enterprise products and other GIS tools?

The Census Bureau developed the TIGER (Topologically Integrated Geographic Encoding and Referencing) database in support of the 1990 Census. TIGER was the first nationwide digital map of roads, railroads and census boundaries. It provided the geospatial foundation for data collection, processing, tabulation, and dissemination. At that time, TIGER included 1990 Census map features and boundaries, the associated 1990 Census final tabulation geographic area codes (such as 1990 Census block numbers), and the codes for January 1, 1990, legal and statistical areas on both sides of each line segment of every mapped feature. This version also contains the final voting district codes and the 1990 Census-designated place codes.

From there, TIGER data has transformed the GIS environment. TIGER stimulated technological developments like MapQuest and Yahoo, followed by Google.TIGER data formed a base for OpenStreetMap in the United States in 2005 and was used as the basis for road names in the Waze navigation system.

The Census Bureau improves TIGER data every year, through a Geographic Support program of continual update and research.  A large part of this program relies upon information from the U.S. Postal Service and tribal, state, and local governments. In the past few years, over 196,000 miles of roads were added to TIGER using data submitted in partner files.

TIGER data has been integrated with other GIS tools to ensure an accurate geographic foundation for the Census Bureau’s data collection, processing, tabulation, and dissemination programs. In support of the 2020 Census, the Census Bureau launched an In-Office Address Canvassing operation. The goal of In-Office Address Canvassing was to manage as much of the review, validation, and updating of the address list as possible in the office; thereby, reducing the amount of fieldwork required to ensure a complete and accurate address list for the 2020 Census.

Between September 2015 and June 2017, the Census Bureau conducted a 100 percent in-office review of every census block in the nation (11,155,486 blocks). Using boundary and road information from TIGER, housing unit counts from the Master Address File, and two different vintages of imagery (one from 2009 and one from the current day), technicians categorized blocks as passive, active, or on-hold. Passive blocks represented stability, meaning the technician verified the currency and accuracy of housing data in the office. Active blocks represented evidence of change and on-hold blocks represented a lack of clear imagery. In these latter instances, In-Field Address Canvassing was required. At the end of the review, 71 percent of blocks were classified as passive.

However, since the 2020 Census was still several years away when In-Office Address Canvassing completed its initial review of the nation, the Census Bureau subsequently used information from the US Postal Service and partner governments to identify areas experiencing recent change and triggered these areas for re-review. Between July 2017 and March 2019, the additional review resulted in the categorization of nearly 87 percent of blocks as passive.

Active and on-hold blocks that were not verified in the office will be validated in the field during the summer of 2019, using TIGER data displayed in a GIS application called LiMA, the Listing and Mapping Application. This In-Field Address Canvassing Operation includes one-third of the nation’s addresses, as compared with the 100 percent in preparation for the 2010 Census.  Using TIGER and GIS, the Census Bureau has streamlined the way it conducts one of the largest decennial census operations.

Census Geocoder is another tool that converts an address to an approximate coordinate (longitude/latitude) and returns information about the address range that includes the address and the census geography. How relevant do you think geocoding is in our world and what are its possible application areas?

More than ever before, decision makers understand the power and value of geography and location data. For decades, government officials and business leaders relied on computer spreadsheets to manage their constituent and customer base. They sorted by last name, address, and/or zip code to assess the present and plan for the future. Today, decision-makers want to see the distribution of their customer base on a map, in relation to other demographic and socioeconomic data. Geocoding makes this a reality.

The Census Bureau launched the Census Geocoder in 2014. The geocoder is freely available to all government agencies as well as the public. Addresses can be geocoded through the web interface or using the services API. Users may submit single records or batches of up to 10,000 records and must include structure number and street name.  Users are also encouraged to submit city, state, and zip code information. The geocoding services ingest the data and use the information within its TIGER database to calculate an approximate coordinate of latitude/longitude, as well as the respective census geography, such as census tract and block.

During the 2020 Census, the Census Bureau will conduct geocoding to help manage the workload.  For those households that do not self-respond to the questionnaire, the agency will hire enumerators to knock on their doors during an operation called Non Response Follow Up.  The addresses that require a personal visit will be geocoded, and then based on location, enumerators will be selected to follow up. The enumerators will be routed from one case to the next using geographic information. This technology will save time and reduce costs related to fieldwork.

In December last year, Esri released ready-to-use US Census Bureau Data in its ArcGIS Living Atlas which was used to track damage boundaries and target recovery efforts in the aftermath of a wildfire in Santa Barbara, California. Do you think using GIS for census data would facilitate better disaster mitigation efforts? What role can Census Bureau play in this?

The Census Bureau produces timely local data that are critical to emergency planning, preparedness, and recovery efforts. Recent events include the earthquake in Alaska, the California wildfires, Midwest flooding, and hurricane impacts in Puerto Rico.

This helps emergency management agencies to identify where response efforts should be concentrated, special or vulnerable populations such as the elderly that may be impacted, and identify surrounding communities that may experience secondary impacts.