A research done by an environmental scientist at Lawrence Livermore National Laboratory shows that delivery drones can lessen the burden on the environment and deliver smaller packages faster than trucks. Delivery trucks are responsible for about 20% of the world’s greenhouse gas emissions. Transportation is still largely powered by fuels made from oil and is now the largest source of greenhouse gas emissions in the US.

Medium and heavy-duty trucks which deliver freight to warehouses and consumers’ homes amounts to 415 million metric tons of carbon dioxide emission which is about one-quarter of transportation emission. 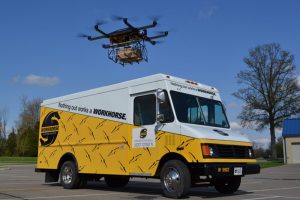 Out of more than 1 million drones registered in the US Most of them belong to drone enthusiasts flying them for fun, but a growing number are used commercially. Companies like Amazon, UPS, Google, and DHL are already exploring ways to deliver packages with drones instead of trucks.

The research found out that in some cases using electric-powered drones rather than diesel trucks could reduce energy use and greenhouse gas emissions. But in other cases, using trucks – especially electric-powered ones – would be more efficient and cleaner.

Findings of the research

Researchers found that package delivery with small drones can be better for the environment than delivery with trucks. While this might not be true for large drones which require more energy to fly. Even in areas which depend on clean energy resource, it’s probably better to deliver larger packages with electric vans or electric trucks rather than large drones, because of the extra warehouse energy required for drones, says the research.

As more companies start using drones delivery system, package delivery to the last mile will be one of their tasks. Companies should focus on small drones delivering small parcels to maximize the potential environmental benefits.

One of the best ways to maximize the environmental benefits would be to use clear energy [such as wind, solar] to charge the battery-powered drones.

Such delivery system should be used for high monetary or time value, for instance, Zipline, a drone delivery company in Rwanda has been successfully delivering blood and medication to interior areas which are not well connected.

Drone Delivery Canada Corp. is trying to launch a similar service in Canada and has just received federal approval to fly their drones beyond line-of-sight, which is a major step in making drone deliveries a reality.

Drone delivery is going to be the future and if it can also help protect our environment than that would be an additional benefit.