AW3D – the world’s first 5m-resolution 3D map of the Earth is developed by JAXA, RESTEC, NTT DATA Corporation from Japan.

The product is implemented by ICIMOD, WHO, Nanyang Technological University, and more than 300 other organizations.

More About the Project – AW3D

Why is this a groundbreaking technology?

Processing such enormous number of satellite imageries would require very long time with the conventional method. After some research and development phase with several trial-and-error efforts, NTTD along with JAXA and RESTEC successfully developed an algorithm to process a huge number of satellite imageries with very high efficiency. The algorithm was so groundbreaking and received “2014 Journal Award” of The Remote Sensing Society of Japan. By implementing such state-of-art technology combining with continuous refinement in the production process, JAXA, RESTEC, and NTTD were able to complete processing some 3-peta bytes size satellite imageries in a just relatively short period of two years.

What are the Socioeconomic Benefits?

By completed global coverage of AW3D, NTTD along with RESTEC was able to provide the 3D map data anywhere in the globe with short delivery time and highly competitive price. For instance, the 3D map made from satellite imageries reduces the cost to a quarter of that of a conventional method that uses aerial photographs and also minimises the lead time to one week. It makes the use of this service possible in emerging countries particularly in Asia and Africa, in various fields including map creation, disaster prevention, a power plant in the electricity sector, mining-field inspections in the natural resource sector, infectious disease prevention in the hygiene sector, and urban and facility planning. With this development, NTT DATA has successfully opened up new markets encompassing 70 countries and contributed to making more efficient and sophisticated disaster prevention measures, resource planning, urban planning, electricity development and communications services in the global market.

How is the extensibility?

With the experience of the 5m global DEM completion as well as state-of-art technologies such as machine learning and multi-view processing, NTTD offers the higher–resolution 3D map with 0.5 m resolution at the highest. This makes NTTD possible to provide customers with the most current and comprehensive coverage of 3D map. As derived products, NTTD also provides 3D building vector datasets for detailed vector analysis, telecom datasets for wireless network planning, and airport datasets which comply with international standards such as ICAO. Its extensibility also made it being applied in various platforms and integrated with many applications, both in private companies and government agencies. 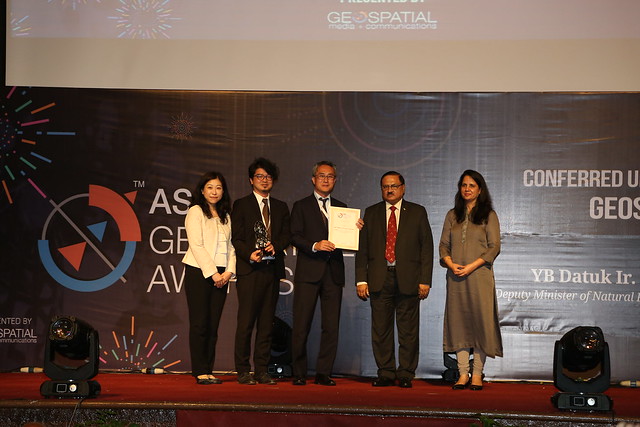 What are the prior awards this project won?

AW3D has won the Japan Prime Minister`s Award in the 2nd Space Development and Application Award hosted by the Cabinet Office, which was announced on March 18, 2016. The Prime Minister`s Award is awarded to cases recognized as being extremely distinguished achievements that have made significant contributions to furthering space development and utilization. In this award, AW3D was acclaimed for its high technological strength and for making a significant contribution to raising public awareness of Japan`s space development and utilisation by supporting greater infrastructure sophistication and efficiency, including in industry and public administration in countries worldwide, through the provision of a broad array of services across 60 countries globally.

AW3D also won the “Nikkei Business Daily Awards for Superiority” at the “2016 Nikkei Superior Products and Services Awards”, sponsored by Nikkei Inc. (“Nikkei”) on January 4, 2017. The award is to honor new products or services of distinguished excellence once a year, with this year marking the 35th contest since its beginning. The selection is made by a judging panel in November, based on six criteria – technological and developmental potential, price effectiveness, the degree of contribution to the company`s achievements, growth potential, originality, and the impacts on industries and society – to handpick about 40 items out of some 20,000 new products and services.

How is this a Public Private Partnership success story?

This project is an important milestone in Private-Public-Projects Collaboration in Aerospace in Japan. AW3D development was the first time in Japan public aerospace agency such as JAXA conducting a joint-project with a private company. It was an important milestone that NTTD and RESTEC became a role model in aerospace development in Japan by conducting more public-private collaborations.