Protection, improvement and rehabilitation of watersheds are of critical importance in the achievement of overall development goals. GIS-based approach facilitates analysis of different morphometric parameters of watershed delineated based on DEM data. Here is a look at a study of morphometric parameters in linear, aerial, relief aspects of three micro-watersheds using Google Maps & Elevation API

Abstract
Watershed characteristics such as size, slope, shape, drainage density, land use/land cover, geology and soils, and vegetation are important factors affecting various aspects of runoff. This article presents general watershed/morphometric characteristics associated with the watershed which is located near Kosigi village in Kurnool district, Andhra Pradesh, India. The input data used for this analysis is downloaded from Open Data Archive (CartoDEM) of ISRO’s Bhuvan website. Thematic maps such as watershed boundary, drainage network, and contour maps are prepared from the DEM data using ArcGIS 10 Hydrology tools. To study watershed characteristics, an online tool is developed using Google Maps API and Google Elevation Service. The Google Elevation Service provides elevation data for locations on the surface of the earth which is useful to find the gross slope of the terrain which is one of important factor affecting runoff. Other characteristics such as size, shape, drainage density of watershed can be analysed using Google Maps API.

A watershed is a basin-like landform defined by highpoints and ridgelines that descend into lower elevations and stream valleys. In other words, a watershed describes an area of land that contains a common set of streams and rivers that all drain into a single larger body of water, such as a larger river, a lake or an ocean.

Objective of protecting or conserving watersheds

Protection, improvement and rehabilitation of watersheds are of critical importance in the achievement of overall development goals. Recognising this, many developing countries are turning increasing attention and resources to the field of watershed management.

Objectives of proper planning and prioritization of watershed development

Setting main objectives: After collecting existing data, identifying major watershed problems and considering management possibilities, the main objectives of the proposed project should be defined. The following are some of the most common ones:
– to rehabilitate the watershed through proper land use and protection/conservation measures in order to minimise erosion and increase the productivity of the land and the income of the farmers;
– to protect, improve or manage the watershed for the benefit of water resources development (domestic water supply, irrigation, etc.);
– to develop rural areas in the watershed for the benefit of the people and the economies of the region;

Different objectives call for different techniques, manpower, inputs and approaches in planning. The monitoring and evaluation criteria will also be different. Therefore, main objectives should be identified and defined as early as possible.

Establishing priorities: Priority watersheds or sub-watersheds should be identified during the preparatory stage. As work cannot be carried out at the same time in all the sub-watersheds due to manpower and resource constraints, a priority list must be set. Priorities are usually given to those sub-watersheds which are in critical condition many times; priority areas are also selected because of people: their enthusiasm, strategic locations, poverty or others.

Significance of study of watershed geology and geomorphology characteristics

Geology characteristics: In many countries, geological maps and information may be already available. However, the map scale may often be small and the information is not specific enough to cover the watershed in question. Some rechecking and refinement are usually needed. If there is no existing information, a brief survey is required. The basic geologic information needed is related to erosion and sedimentation. Rock types, depth of weathering, structures, among others, are the main concerns.

Geomorphology characteristics: Geomorphology deals with land forms in a watershed. A survey of land forms will result in a better understanding of the erosion process, hazards. For instance, a valley at youth stage will have more active erosion than one at old stage. High stream density usually means quick surface runoff and flash floods, etc. This kind of information, together with rock types and structures, permits proper selection of sites for dams and roads as well as estimation of peak flows and timing, etc. In addition to collection of descriptive land form information, there are some quantitative analysis methods which can be used for comparison or interpretation.

Study of watershed/morphometric characteristics: Morphometric analysis is refers as the quantitative evaluation of form characteristics of the earth surface and any landform unit. It incorporates quantitative study of the various components such as, stream segments, basin length, basin parameters, basin area, altitude, slope, profiles of the land which indicates the nature of development of the basin.

Stream Order (U)
Strahler (1952) system of ordering streams has been followed in general because of its simplicity where the smallest, un-branched fingertip streams are designated as 1st order, the confluence of two 1st order channels give a channel segments of 2nd order, two 2nd order streams join to form a segment of 3rd order and so on. When two channel of different order join then the higher order is maintained.

Stream Number (Nu)
The total number of stream segments present in each order is the stream number (Nu).

Stream Length (Lu)
The total length of individual stream segments of each order is the stream length of that order.

Basin length (Lb):
Gregory and Walling (1973) defined the basin length as the longest in the basin in which are end being the mouth.

Basin Area (A)
The area of the watershed is another important parameter like the length of the stream drainage. Schumm (1956) established an interesting relation between the total watershed areas and the total stream lengths, which are supported by the contributing areas.

Basin Perimeter (P)
Basin perimeter is the outer boundary of the watershed that enclosed its area. It is measured along the divides between watersheds and may be used as an indicator of watershed size and shape.

Length of Overland Flow (Lo)
The average length of overland flow is approximately half the average distance between stream channels and is therefore approximately equals to half of reciprocal of drainage density (Horton, 1945).

Drainage Density (Dd)
Drainage density is the stream length per unit area in region of watershed (Horton, 1945, p.243 and 1932, p. 357; Strahler, 1952, and 1958; Melton 1958) is another element of drainage analysis. Drainage density is a better quantitative expression to the dissection and analysis of landform

Texture Ratio (Rt)
According to Schumm (1965), texture ratio is an important factor in the drainage morphometric analysis which is depending on the underlying lithology, infiltration capacity and relief aspect of the terrain. The texture ratio is expressed as the ratio between the first order streams and perimeter of the basin (Rt = Nl / P)

Drainage Texture (Dt)
Drainage texture is one of the important concept of geomorphology which means that the relative spacing of drainage lines. Drainage texture is also depends on the underlying lithology, infiltration capacity and relief aspect of the terrain. Dt is total number of stream segments of all orders per perimeter of that area (Horton, 1945). (Smith, 1950) has classified drainage texture into five different textures i.e., very coarse (<2), coarse (2 to 4), moderate (4 to 6), fine (6 to 8) and very fine (>8).

The areal aspect is the two dimensional properties of a basin.

Compactness Coefficient (Cc)
Compactness Coefficient is used to express the relationship of a hydrologic basin to that of a circular basin having the same area as the hydrologic basin. A circular basin is the most susceptible from a drainage point of view because it will yield shortest time of concentration before peak flow occurs in the basin (Nooka Ratnam et al. 2005).

Linear and areal features have been considered as the two dimensional aspect lie on a plan. The third dimension introduces the concept of relief. By measuring the vertical fall from the head of each stream segment to the point where it joins the higher order stream and dividing the total by the number of streams of that order, it is possible to obtain the average vertical fall.

Basin Relief (H)
Basin relief is the elevation difference of the highest and lowest point of the valley floor.

Relief Ratio (Rh)
Relief ratio is defined as the ratio between the total relief of a basin i.e. elevation difference of lowest and highest points of a basin, and the longest dimension of the basin parallel to the principal drainage line (Schumn 1956). The high values of Rh indicate steep slope and high relief and vice-versa. Run-off is generally faster in steeper basins, producing more peaked basin discharges and greater erosive power 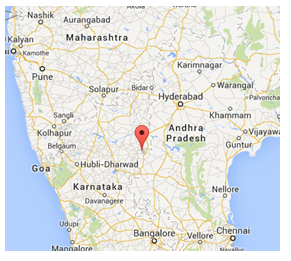 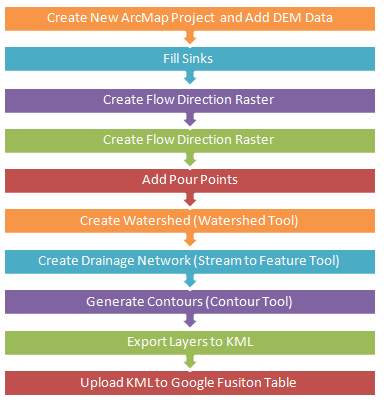 Delineation is part of the process known as watershed segmentation, i.e., dividing the watershed into discrete land and channel segments to analyze watershed behavior. 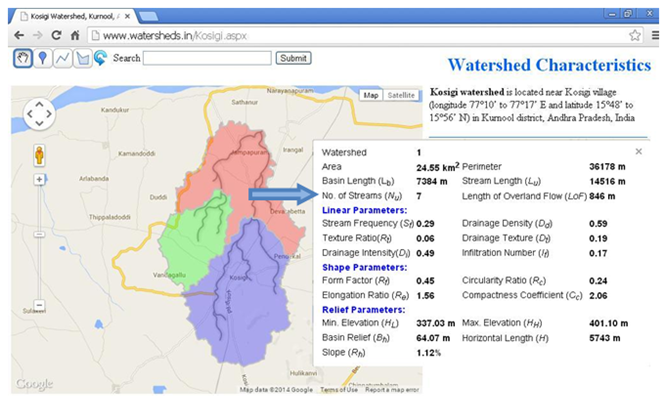 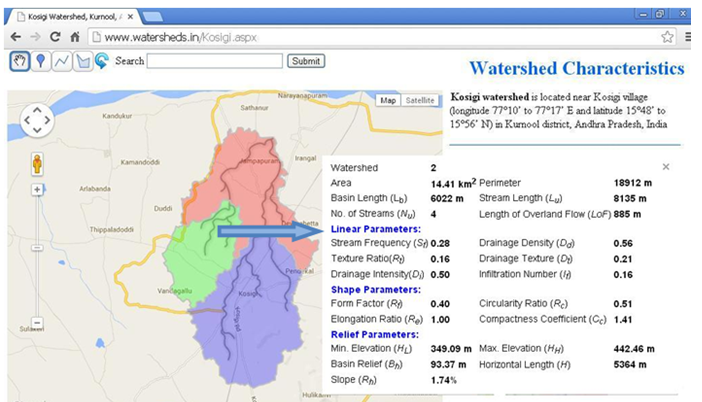 The details of the morphometric analysis and comparison of drainage basin characteristics of Kosigi watershed are presented in Table 1. 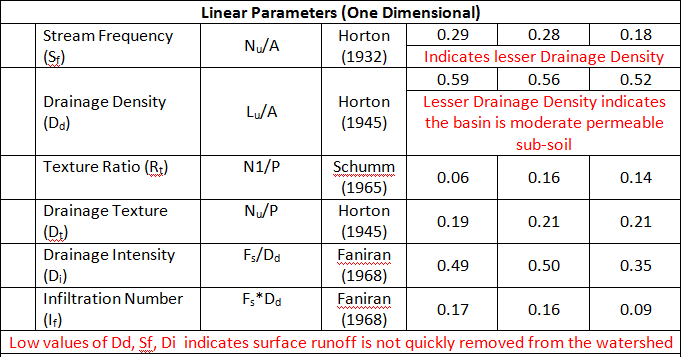 * It is observed that the basin relief which is automatically calculated is showing wrong values. Even though the procedure and data is correct but this is happening due to presence of small hills on the perimeter of watershed. This problem can be resolved by visual interpretation and manual calculation using Google Maps & Elevation API.

GIS based approach facilitates analysis of different morphometric parameters of watershed delineated based on DEM data using ArcGIS software. In this study, an attempt is made to study morphometric parameters in linear, aerial, relief aspects of three micro-watersheds using Google Maps & Elevation API. It is observed that the shape of these watersheds are nearly circular, less elongated with gentle slope.