The Himalayas being the highest mountain chain on the earth, are marked by very high relief and intense erosional activity. As a result of weathering and denudational processes, enormous amount of debris is released from the region. The natural rock waste (debris) may travel as a debris flow. As defined, debris flow is a type of landslide in which the various individual particles travel separately within a moving mass. It is an extremely rapid flow of material, consisting of a mixture of rock fragments, boulders, cobbles and gravels, set in a matrix of sand, silt and a small clay content, with a variable quantity of water. The material may be derived from landslides or weathered rock. It moves down the slope under gravity, usually in surges. The debris flow may occur on hill slopes, or more frequently, take the form of a channelled flow. 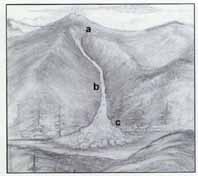 A typical debris flow with segments of source area (a), main flow track (b) and depositional cone (c): a. IRS-1D PAN sensor image (28 Nov. 1998); the area covered is located about 25 km NE of Uttarkashi (Garhwal Himalayas). b. 3-D interpretation sketch of the same

The flow track may follow a pre-existing drainage channel. The tracks may have a typical V-shaped cross-section, and can be fairly long, leading to long-distance transportation of debris, for several kilometers. The debris flow ends in an alluvial fan or cone, as it enters into a wider valley with lower gradient. A swarm of debris flows observed on IRS-1D PAN image (28 Nov. 1998); the area is located about 15 km NE of Uttarkashi (Garhwal Himalayas)

Delineation of debris flows on remote sensing data
The active debris flows can be easily identified on satellite remote sensing images like IRS-1C/1D PAN sensor data, based on tone, topography, slope and shape of the features (Fig. 2). Topographic peaks and valleys can be easily interpreted from differential solar illumination. Light tone (high reflectance) in the panchromatic band is indicative of fresh erosion and absence of vegetation. The light toned scar edge in higher elevated areas with a fan apex-downward indicates the source area. The thin linear light toned feature is the main debris flow track. The depositional cone is characterized by light tone, conical shape with apex upward and base merging with the valley (Figs. 1& 2).

Problems associated with debris flows and possible measures
The debris flows move in surges and not in a continuous manner. At the time when geotechnical surveys are usually made for developmental planning, often there is no activity in the debris flows, and so they get ignored. This occurs more due to lack of technical appreciation of these features.

The construction of roads during developmental activities frequently cut- across the debris flow tracks. The result is that debris is frquently dumped on the roads in every surge, particularly during the monsoons. When debris has accumulated in sufficient amount blocking the road, it is pushed down on the lower slopes to clear the passage. Besides causing traffic hindrance, this also destroys the natural vegetation- ecosystem on the lower slopes. 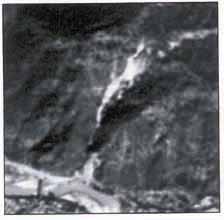 (a) IRS-1D PAN image showing the landslide scar and the debris flow track. 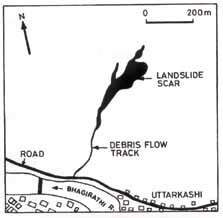 (b) Interpretation map of the satellite image 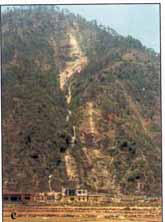 (c) Field photograph of the scar and the debris flow track 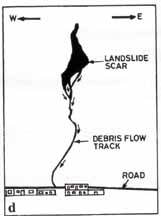 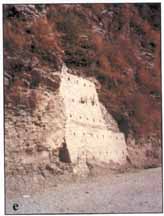 Near Uttarkashi town, there occurs a striking example of debris flow, known to be a major cause of traffic blockade from time to time (Figs. 3a-e). The landslide scar is about 80m wide, located at an elevation of 350m above the road level. The debris flow track is about 400m long and only about 3m wide at the road level. It brings large amount of debris from the landslide scar at the top, but the banks of the track are quite well vegetated. To prevent falling of the debris on the road, a breast wall has been erected, across the flow track as a precautionary measure (Fig. 3e). This can be quite hazardous as any subsequent surge of the debris flow may lead to collapse of the wall, damaging the bank and even wiping out the road.

Today, the Earth system is compared to a living body by planetologists. In this perspective, debris flows may be compared to sewage channels, the nature’s agents that transport waste (debris) to disposal sites. Therefore, it is necessary that debris flow tracks are not truncated or interfered with. This is particularly so in view of the fact that the natural debris discharge in relatively thin channels takes place in a more environment- friendly manner, as can be seen from the lush vegetation thriving on the either banks of the debris flow tracks (Fig.3c).

The solution to the problem lies in either stabilising the source area, or by providing suitable ramps/bridges so that the debris flow is allowed to pass without hindrance. It should be appreciated that the Himalayas give birth to both streams of both water and debris. As a matter of fact, both of them deserve similar concern and consideration. As ramps/bridges over water streams are routinely made, similarly, ramps/bridges over debris flows would be better provided. The various features of the debris flows can be easily mapped on remote sensing images, and therefore this information can be well used in planning and maintenance of the developmental activities.