Abstract:
Forest Fire is a natural phenomenon. It is part of the nitrogen cycle and it helps forests to grow healthy. However, “wildfire” is a huge and out of control fire which destroys human wealth and therefore, it is kind of disaster. The very first strategy to defend the forests against wildfire is to avoid it. So fire risk maps are produced and even prescribed burning is done. Nevertheless, wildfire happens and the only choice in this case is to control it. Knowing the fire behavior, one can use forest fire simulation to predict and control the wildfire. There are many factors which play a role in a forest fire. The most important ones are wind velocity and direction, index of forest flammability, slope and aspect of the terrain. Slope is an efficient factor to determine the fire spread direction. Velocity of the wind plays a more serious role in fire spread, if its direction matches with the aspect. A grid-based Digital Terrain Model (DTM) is used to extract slope and aspect of the terrain. Also raster maps showing the index of flammability, velocity and direction of the wind are used. All of these information are put in a Geospatial Information System (GIS) to simulate and visualize the wildfire spread. It is shown that GIS is a very efficient tool to predict and control the wildfire.

Introduction
Nowadays application of Geospatial Information Systems (GIS) in disaster management has extended considerably and in some cases it is even unavoidable. Forest fire happens from time to time and this has given human a chance to observe and develop different models for forest fire behavior. GIS as a powerful tool for management of spatial information, has also proved its potential in forest fire management. There are different applications of GIS in forest fire management out of which the most important ones are hazard map production, forest fire simulation and resource management. Simulation by itself has a main role in the management of forest fire. GIS uses various information layers such as Digital Elevation Model (DEM) and index of flammability along with different models for the pur[ose of forest fire management. Models can be simple or complex. Simple models have few parameters and can be implemented even without GIS, however, because of their simplicity their results are not so reliable. On the other hand, very complex models which use detailed physical characteristics of fire are not reliable either as there is not either enough or up to date information on their parameters. So finding an optimum model that takes advantage of sufficient number of parameters while has an acceptable level of simplicity is very important.

Importance of forest fire simulation
Forest fire destroys jungles which are an important part of human environment and devastates human wealth and facilities, causes weather pollution and is dangerous for the people who live near forests. Just in 1994 the United States spent more than one million dollars to protect forests against fire while 33 people lost their lives due to forest fires [3]. Therefore, there are many attempts to predict and prevent wildfire. Simulation, as one of these attempts, tries to forecast the forest fire extension and prepare a plan to control and manage the fire through preventing its extension, extinguishing the fire and diminishing its destruction. Obviously, efficient simulation models can have a major role in protecting the natural resources as well as environment management [2].

Forest Fire
Depending on the source of fire, forest fires are divided into three categories [4]:

Forest fire is a natural phenomenon and is a part of nitrogen cycle. Its exclusion is an interference with the nature. However wildfire is a disaster and any discussion about forest fire is essentially related to this type of forest fire. As mentioned before, prescribed burning is a strategy to protect forests against wildfire [4].

GIS is a powerful spatial processing tool which is used to solve many complex problems. In the context of forest fire some applications of GIS are as following:

Among them, fire simulation is the subject of this paper.

Simulation
Simulation of a phenomenon is the operation that consists of studying its behavior in situations generated by virtual data in order to better understand the behavior of the phenomenon in the real world [1].

Implemented model (Normal model)
By taking the fire characteristics into account this paper tries to suggest a flexible model which is a function of all of the important parameters of fire. Like the network model, this model simulates the fire cell by cell.

Brief definition
In this model fire life in a cell is assumed to follow a normal PDF curve. In other words, it means that at the start of burning the intensity of fire is low and then it becomes high when it reaches its maximum and then it reduces until it diminishes. Physical experiments show that this assumption is not far away from reality and deviations from normal curve can be ignored in this model. During fire life, a burning cell emits heat to its neighboring cells. Rate of heat transfer depends on some factors that will be discussed later. If the received heat by a cell is more than its degree of flammability, it begins to burn and this process goes go.

Input data
Main information layers in this model are: DEM and index of flammability. DEM is used in grid form. Index of flammability or combustibility is a map in which forest regions are classified by their combustibility characteristics in a quantitative manner. Such a classification has been done for the forests in Canada [8]. Wind velocity and direction are two other main parameters in this model. The combined effect of these two parameters on the fire spread is very complex. Other parameters and coefficients used in the model are described later on.

The main part of this algorithm is fire loop which work as following:
This loop becomes active when the fire starts and becomes inactive when the fire stops. The input for this loop is the fire starting point and as a function of time calculates the amount of heat for the burning cell according to the normal cure. Meanwhile, the heat of the burning cell is emitted to the adjacent cells and if the received heat is more than the degree of flammability, adjacent cells start to burn too. Cells adjacent to one or more burning cells receive heat continuously but do not absorb all of the received heat. Some of the received heat is continuously lost. Temperature of a burning cell, value of heat transfer to the adjacent cells and value of heat loss are all depended on some factors which are set by parameters. Fire loop continues till no burning cell exists. After the loop is over, the cells are mainly divided into two categories: burnt and not burnt.

Effective factors
The parameters considered in this model are:

Combined effects
The effect of above mentioned factors is more complex when they act together:

This model has many coefficients and setting these coefficients properly has a great effect on the model performance. To set these coefficients, some experiments are done on fire. For instance, coefficient of the diagonal neighbors, coefficient of the effect of slope and some other coefficients are determined in this way. Due to the lack of sufficient, appropriate and up to date information about forest fires in Iran, a simulated forest with a scale of 1:100 is put on fire. Burning this simulated forest provides a good tool to assess the performance of the model. Figure 4 shows one of the simulations. In this figure the terrain has a constant slope of 13 percent downward, the wind with the azimuth of 150 degrees has a velocity of 15 kilometer per hour. Each color shows fire spread after one hour. 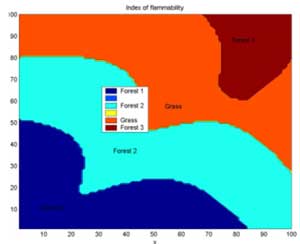 Figure 3: Index of flammability for simulated area. This simulation has three different forest regions and a meadow. Figure 4: Simulated model, fire starting point has been shown. Each color shows fire spread after one hour.
Conclusions and recommendations
Concentric, pseudo-conical, polygonal and network models have obvious problems and are not compatible with normal model. Therefore, their results are not compatible either. For assessment of the normal model, information acquired from the simulated as well as forest fire records in developed countries are used. This comparison shows that normal model can be an acceptable approximation of fire spread. The degree of compatibility between the result of normal model and the simulated forest fire is about 70 percent. However, just comparison with a real forest fire can reveal compatibility and power of this model.

Fire is a complex and dynamic phenomenon and therefore, simulation of a forest fire is a real challenge. For example velocity and direction of the wind can vary continuously but real time determination of these variations is almost impossible. On the other hand, the combined effect of wind and topography can not be easily determined. Moreover, the behavior of wind in the valleys curl current of wind is not predictable.

More assessment on the relative effect of the fire parameters is one of the requirements of this model in the future. In case a real forest fire record exists, setting coefficients with artificial neural networks seems to be appropriate. Also because of the similar effect of fire in all directions, one can use a network with hexagonal cells instead of square ones.