Xnor.ai (Xnor), the company that first proved it was possible to run state-of-the-art AI on resource-constrained computer platforms, today unveiled its newest innovation – a standalone battery-free, solar-powered AI technology that will enable AI to run in an always-on mode on a range of edge devices. Xnor’s solution, deployed on a hardware device roughly the size of a US quarter is able to intelligently detect visual objects, including people. This breakthrough machine learning and computer architecture approach reaches a greater power efficiency so that even state-of-the-art deep learning models, previously dependent on powerful GPUs, can be powered by a simple solar cell. 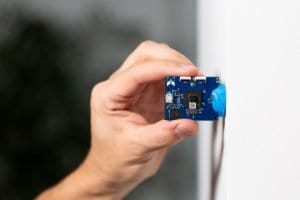 “Power will become the biggest bottleneck to scaling AI” said Ali Farhadi, Co-founder of Xnor.ai. “What Xnor has proved today is that it is now possible to run AI inference at such low power that you don’t even need a battery. This will change not only the way products are built in the future, but how entire cities and countries deploy AI solutions at scale.”

With this innovation, AI technologies – embedded into solutions ranging from consumer wearables to autonomous vehicles – can be scaled faster, more efficiently, and with far less environmental impact. By thoughtfully co-designing machine learning algorithms with hardware architecture, Xnor’s technology is so efficient that if deployed on an Application Specific Integrated Circuit (ASIC), will run on the order of Microjoules per inference. Even at these stunningly low power numbers, state-of-the-art accuracy is preserved.

“With technology this low power, a device running on only a coin cell battery could be always on, detecting things every second, running for 32 years!” – Saman Naderiparizi – Head of Hardware Engineering, Xnor.ai

According to a study by the Natural Resources Defense Council, US data centers that are processing an ever increasing number of traditional AI algorithms are estimated to consume nearly 140 billion kilowatt-hours of electricity each year by 2020, which is the equivalent to the output of 50 large coal-fired power plants. This not only costs American businesses $13 billion annually, but releases nearly 100 million metric tons of carbon pollution every year.

To demonstrate the viability of Xnor’s AI technology, embedded within the current version is a camera capable of capturing and analyzing video content using state-of-the-art deep learning algorithms. The camera can identify, classify, and code objects within a frame, and then send information to the recipient in near real-time using low data rate wireless communication protocols designed for IoT applications. Importantly, photo and video data never leaves the device, as only insights from the analyzed frames are distributed, resulting in significantly higher security to help guarantee that a user’s privacy is protected.

The solution is so small and lightweight that it can balance on the tip of your finger. Products built using this technology will work out of the box without the need to charge or connect to the Internet, enabling Xnor to bring advanced AI capabilities to virtually any device, including in the most remote areas.