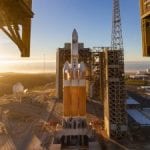 US: The launch of a much-delayed U.S. spy satellite has been delayed again due to an issue with its rocket and it is still unclear that when the mission will take place.

The United Launch Alliance, which built the Delta IV Heavy rocket that will launch the satellite, was aiming for a Jan. 6 launch from California’s Vandenberg Air Force Base. But on Saturday, ULA announced it was standing down from the launch try.

“We continue to remedy the technical issues that caused the last scrub of the Delta IV Heavy, and are working with our partners, the National Reconnaissance Office and the U.S. Air Force, to ensure that we fly when it is safe to do so,” Gary Wentz, ULA vice president of Government and Commercial programs, said in a statement. “We understand that this is a high-priority mission for the nation’s warfighters and we take our commitment to safety and mission assurance seriously.”

ULA initially attempted to launch the classified NROL-71 mission on Dec. 7 and 8 but stood down due to technical issues. Bad weather postponed a Dec. 18 launch attempt. ULA then announced a Dec. 30 launch target, before slipping to Jan. 6 ahead of the latest delay.