US: Researchers at the SENSEable City Laboratory, a research initiative at the Massachusetts Institute of Technology, have developed an unmanned aerial vehicle (UAV) that can guide visitors around the campus. 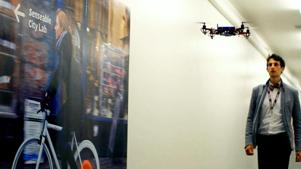 Researchers have developed a smartphone app called ‘SkyCall’ which enables the visitors to make specific requests, and the UAV to both locate and wirelessly communicate with them. When the user presses the ‘call’ button, SkyCall accesses the GPS location of smartphone and relays spatial coordinates to the nearest available UAV. The UAV utilises onboard autopilot and GPS navigation systems with sonar sensors and WiFi connectivity (via a ground station), enabling it to fly autonomously and communicate with the user via the SkyCall app. The onboard camera integrates as both an information gathering system (relaying images to a ‘base’ location upon encountering the user), as well as a manually-controlled camera, accessible to the visitor-come-tourist again via the SkyCall app.