US: Trimble has revealed that the Federal Aviation Administration (FAA) has granted an exemption that will allow the company to conduct commercial operation of its Trimble UX5 Aerial Imaging Solution in the US. The exemption was granted pursuant to Section 333 of the FAA Modernisation and Reform Act of 2012, which authorises the FAA to grant exemptions from FAA rules limiting commercial operation of Unmanned Aircraft Systems (UAS) pending the adoption of permanent rules. Section 333 exemptions are intended to ‘provide a pathway for civil operators who desire safe and legal entry’ into the US National Airspace System (NAS).

The Trimble UX5 is an unmanned fixed-wing aircraft targeted at the surveying, agriculture, oil & gas, mining, construction, environmental industries. The company claims system autonomously captures a series of high-resolution images during flight, which is typically up to 50 minutes covering as much as 2.3 square kilometers (approximately 1 square mile) when flying 120 meters (approximately 400 feet) above the ground. Using Trimble Business Center Aerial Photogrammetry software, images are used to easily generate 2D and 3D deliverables such as orthomosaic images, three-dimensional point clouds and contour maps. The system also enables the collection of large amounts of data, often faster than traditional surveying or mapping technologies. 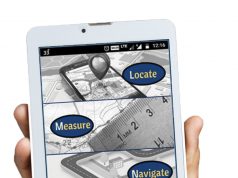