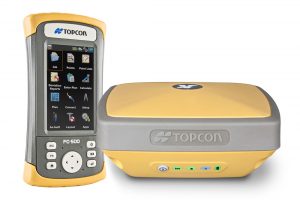 The Netherlands: Topcon Positioning Group announces the latest addition to its HiPer series of integrated receivers — the HiPer VR is designed to provide a versatile solution with the most advanced GNSS technology available.

“The HiPer VR is packed with the most powerful GNSS technology in a housing built to withstand the harshest field environments,” said Alok Srivastava, director of GNSS Product Management. “The Topcon advanced GNSS chipset with Universal Tracking Channels™ technology allows the HiPer VR to automatically track signals from all available constellations — including GPS, GLONASS, Galileo, Beidou, IRNSS, QZSS, SBAS — now and into the future.”

The HiPer VR features TILT (Topcon Integrated Leveling Technology) designed to compensate for mis-leveled field measurements out of plumb by as much as 15 degrees.

“TILT incorporates a revolutionary 9-axis IMU (inertial measurement unit) and an ultra-compact 3-axis eCompass allowing operators to quickly and confidently take field measurements even in scenarios where getting the receiver into an exact vertical setup is difficult or not possible,” said Srivastava.

The HiPer VR is designed as a complete and versatile solution for a variety of applications including static or kinematic GNSS post-processed surveys, a network RTK option when paired with a field computer equipped with a cellular modem, a radio or LongLink™ job site RTK rover, as well as the GNSS component of the Hybrid Positioning and Millimeter GPS workflows.