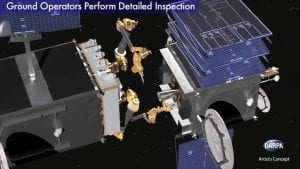 US:  SSL, a Maxar Technologies company MAXR, -1.93% (MAXR), and a leading provider of innovative satellites and spacecraft systems, announced that it has exercised its right to terminate participation in the Robotic Servicing of Geosynchronous Satellites (RSGS) program, a public-private partnership with the U.S. Defense Advanced Research Projects Agency (DARPA), citing a need to focus its resources on ensuring optimal returns when weighed against other capital priorities, such as WorldView Legion. SSL remains unwavering in its commitment to its customers on all existing contracts.

SSL has notified DARPA that it has decided to discontinue its participation in RSGS, an option available at this time under the terms of the Other Transaction Agreement between SSL and DARPA. This decision is consistent with Maxar’s commitment to disciplined prioritization of capital. Maxar remains confident in the potential of the on-orbit servicing market and the value of public-private partnerships. SSL will also be terminating its associated contract with Space Infrastructure Services LLC, which SSL was awarded in June 2017 to develop a servicing spacecraft vehicle for the RSGS program.

Signed in 2017, the Other Transaction Agreement called for DARPA to develop the dexterous robotic payload and provide a government-funded launch. SSL was responsible for funding the development of the spacecraft bus and integrating the resulting robotic servicing spacecraft with the launch vehicle, as well as providing operations staff over the full mission duration.

“While disappointed that we are unable to find an economically viable path to support RSGS and meet our return criteria, we are dedicated to partnering with the U.S. government to realize the full potential of in-space robotic servicing of spacecraft, as well as assembly and manufacturing in space,” said Richard White, President of SSL Government Systems. “At Maxar, we are uniquely positioned to leverage technology and expertise from across our businesses to accelerate innovation for the new space economy. We are proud of our leadership in space robotics, including our pioneering work in NASA’s Restore-L mission to refuel LANDSAT-7, and we will continue to pursue leading-edge opportunities.”