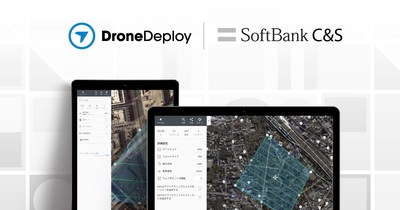 US: DroneDeploy, a drone software startup, and leading drone data platform has launched the Drone software ”DroneDeploy Cloud Service” in Japan and SoftBank C&S will be the distributor. As the only drone cloud software to be distributed by SoftBank C&S, the partnership brings DroneDeploy’s best-in-class software solutions to the Japanese commercial technology market.

With DroneDeploy as an industry innovator in drone operations technology, and with SoftBank C&S’s successful track record in bringing software giants to market in Japan, this partnership paves the way for DroneDeploy to continue its rapid international expansion in the aerial data space.

SoftBank C&S (SoftBank Commerce & Service Corp, a subsidiary of SoftBank group) is one of largest IT distributors on the planet and now provides a drone ecosystem that spans the entire industry. As a drone and drone-related sales organization in Japan, SoftBank C&S carries drones and related IT products. By adding DroneDeploy to their portfolio, SoftBank C&S is positioned to become the leading drone systems provider in Japan.

The global market for commercial drones is estimated to exceed $13 Billion by 2020. As more Japanese businesses use drones to generate aerial insights, they’re turning to SoftBank C&S — with 8 years of industry experience and now, enterprise-grade hardware and best-in-class software solutions — to scale drone operations. Combining the sales, distribution and marketing capabilities of SoftBank C&S with DroneDeploy’s Cloud Platform and App Market poises DroneDeploy to become the universal drone operating system.

“We’re excited to be working with SoftBank C&S in Japan. It provides us immediate global reach into one of the most mature enterprise drone markets,” said Scott Lumish, Vice President of Business Development at DroneDeploy. “We believe SoftBank C&S will help DroneDeploy dominate the aerial data space and become the operating system for all drones in Japan, and eventually the rest of world.”