Nigeria: Satellite imagery of Nigerian town, Rann, shows two distinct areas of destruction of the January 17, 2017 airstrikes in the densely populated areas on the western side of the town that are consistent with the detonation of multiple air-dropped mutations, according to Human Rights Watch.

It also said that Nigerian authorities should conduct a prompt, thorough, and impartial investigation on the matter. According to the reports, at least 35 structures were destroyed in the attack, including shelters for displaced people.

After the airstrikes, the government stated that the Nigerian air force accidentally carried out the strikes, should compensate those who were injured and the families of those killed as a result of any violation of international humanitarian law or the right to life.

“The Nigerian military has taken an important and rare step in accepting responsibility for this horrible attack,” said Mausi Segun, senior Nigeria researcher at Human Rights Watch. “Now it should go further by explaining how it came to attack a displacement settlement, and by compensating the wounded and relatives of those who lost their lives.”

The investigation should determine the causes of the attack and the military should make the necessary changes, including in its planning of operations to minimize the risk of similar attacks in the future, Human Rights Watch said. 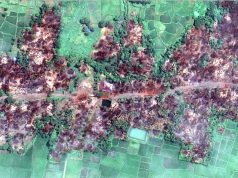 Satellite Imagery showcases the destruction of the Rohingyas in Myanmar