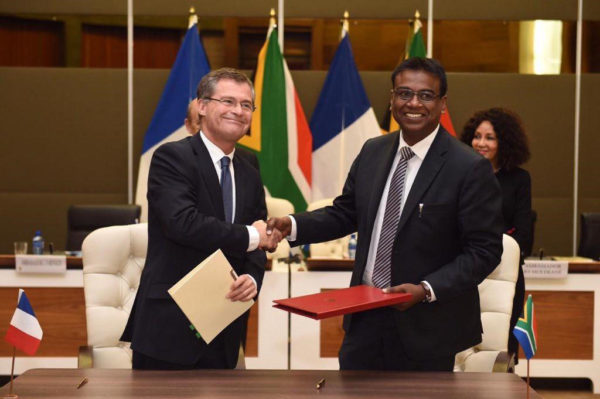 South Africa: The French national space agency (CNES) and the South African National Space Agency (SANSA) have signed an agreement outlining future space cooperation between the two countries on 28 February 2019, in Pretoria. Building on CNES’s longstanding presence in South Africa, with a French ground station based at SANSA Space Operations in Hartebeesthoek, this founding agreement lays the basis for future joint space projects between the two countries.

Targeted areas of cooperation include space operations, space science, earth observation, telecommunications, applications, and research and technology. The two agencies will also coordinate on international regulatory matters. Initial discussions centred around the Space Climate Observatory, the International Charter on Space and Major Disasters, and the training of engineers.

This agreement affirms South Africa as one of CNES’s key partners on the African continent. According to SANSA CEO Dr Valanathan Munsami, SANSA and CNES have enjoyed a fruitful relationship for almost 40 years and this agreement cements the partnership with the intent of making greater strides in space investment both locally and abroad.

South Africa is fostering the development of its space sector and has already launched three micro- and nanosatellites. The production of a second constellation following the successful launch of ZACube-2 is underway. This success is in part cemented through the French South African Institute of Technology (F’SATI) programme where the Cape Peninsula University of Technology (CPUT) was commissioned to produce South Africa’s first ever cubesat. The F’SATI programme has been instrumental as a training platform for postgraduate students who studied at CPUT and institutions based in France.