Russia: Russian Space Systems company has released a statement saying that Russia and China have developed a draft project to create a global international navigation system based on China’s BeiDou and Russia’s GLONASS satellite navigation. This system will be utilized by the member states of BRICS group and the Shanghai Cooperation Organization. The statement further clarifies that the project is based on advanced Precise Point Positioning technologies. The implementation of the project will extend the use of global and regional navigation satellite systems in Brazil, Russia, India, China, South Africa and Pakistan as well as in Tajikistan, Kyrgyzstan and Uzbekistan 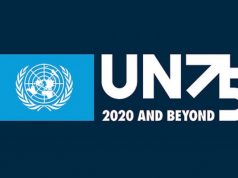 As we celebrate 75 years of UN Charter, a look at 2020 & elasticity of the world order