Quanergy Systems, Inc., has announced its M8 LiDAR sensor has been selected for the Geo-MMS LiDAR drone mapping product line by Geodetics, leading provider of LiDAR Drone mobile mapping systems. After conducting a series of drive and flight tests to validate the sensor performance, Geodetics has added Quanergy’s M8 sensor to its LiDAR Mapping and Photogrammetry systems offering the best range and number of returns for Geo-MMS customers. Quanergy’s M8 offers the industry’s leading LiDAR solution with the best performance in the market for mapping. It has a high point cloud density that is three times that of competitors and a more accurate range and fine resolution than the current market offering, with 0.033 degree angular resolution and 3cm range accuracy.

“At its core, LiDAR is a mapping technology, and while it has made its name as an important component for autonomous vehicles, these detailed maps are crucial for many other industries as well,” said Dr. Louay Eldada, CEO of Quanergy. “Geodetics is one of the most accomplished companies in drone mapping and the fact that they have selected to partner with Quanergy speaks volumes to the superiority of our LiDAR sensors.”

Geodetic’s Geo-MMS system is a cost-effective modular system for vehicle and drone-based Photogrammetry, LiDAR mapping and creation of RGB/multi-spectral colorized LiDAR point clouds. Geodetics customers have used the Geo-MMS product line in a wide variety of applications including mapping the San Andreas fault, areas covered with thick trees up to 8 meters high with severe cenotes in Cancun, more than 600 kilometers of railroads in Mexico and Brazil, more than 900 kilometers of power and transmission lines in Chile for line inspection, solar farm mapping, construction, BIM, forestry, snow, urban planning and many others. By incorporating Quanergy’s M8 sensors and making necessary updates to Geodetics existing system, the Geo-MMS product line now provides up to 125m effective range and three returns for any drone mapping applications, allowing it to fly at the highest altitudes with the highest resolution for commercial drones.

“The range and number of returns offered by Quanergy’s M8 make it the most compelling option for our customers,” said Dr. Lydia Bock, CEO of Geodetics. “With the integration of the M8 with our Geo-MMS product line, Geodetics can now offer the most advanced drone mapping systems on the market.” 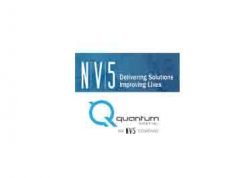