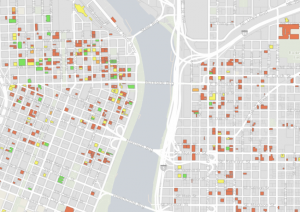 According to Dan Douthit of Bureau of Emergency Management, many west coast cities — especially in California — already have policies to make them safe or tear them down.

“So Portland is looking at a policy where we would require that all building owners either retrofit or demolish them,” he said. “But we also want to come up with some incentives to make it easier for building owners to do the work.”

A committee is expected to propose that new policy later this year. Since Portland first collected data on the buildings in the 1990s, 13 percent have been upgraded. And another 8 percent have been demolished.