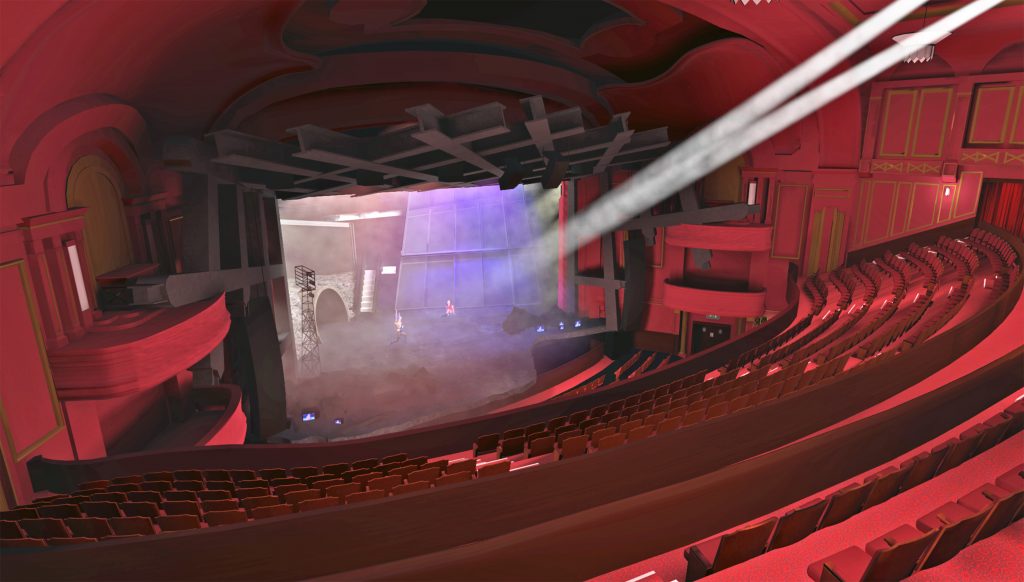 UK: Pointfuse point cloud software is helping to boost the appeal of West End and Broadway shows. Used by laser scanning and virtual reality specialist Preevue, Pointfuse is dramatically reducing the time taken to process complex laser scans into usable and accessible 3D models to be used as part of their visualizations. These visualizations, created with Preevue’s in-house Virtual Reality (VR) software, are used to see how a set design fits in a new theatre, optimize line of sight modifications to maximize ticket sales and provide virtual site visits. Preevue has already used Pointfuse to good effect on Jim Steinman’s Bat Out of Hell The Musical when it made its West End debut earlier this year.

“The foundation of all our visualizations is laser scanning. Many theatres have no plans or they are inaccurate if they do exist, so laser scanning is a time and cost-effective starting point,” commented Ryan Metcalfe, Founder and Managing Director Preevue. “However, visualizations are only ever as accurate as the scans you start with, so scanning to an accuracy of 2 millimeters gives us absolute confidence in the outputs we produce and the decisions that are subsequently made. This level of accuracy can, however, present its own issues such as the long turnaround times on triangulated meshes from the point cloud. Using Pointfuse allows us to get to work much sooner with a quickly generated 3D model.”

For example, working on Jim Steinman’s Bat Out of Hell, Preevue completed a thorough laser scan of the Dominion Theatre in London’s West End using a FARO Focus X330. Capturing more than 150,000,000 individual measurements the resulting point cloud was more than 40GB in size. Prior to the introduction of Pointfuse to the workflow this raw data would have taken many days to process. However, using Pointfuse to create a 3D model with classified surfaces took just a few hours, giving the Preevue team a workable model to use as a base from which they could begin modeling in a fraction of the time.

The resulting outputs, including VR visualizations, were used for both production and ongoing marketing including set design, site line checks, ticket pricing and venue and set CAD drafting. Preevue also developed a first of its kind augmented reality app to enhance the audience’s experience.

“Working on the Bat Out of Hell project we used Pointfuse to rapidly turn the point cloud into a mesh we could use to start modeling as soon as possible and within very tight timeframes,” continued Metcalfe. “We are excited to work closely with Pointfuse to further develop the software so we can achieve even better accuracy, even quicker!”