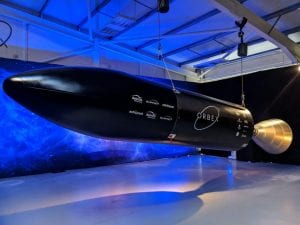 UK: Orbex has publicly unveiled its Prime rocket for the first time at the opening of its new headquarters and rocket design facility in Forres in the Scottish Highlands.

The completed engineering prototype of the Stage 2 rocket (the stage that will transit into orbital flight after launch) is made from specially-formulated lightweight carbon fibre and aluminium composite and includes the world’s largest 3-D printed rocket engine. Orbex Prime is a completely re-thought and re-engineered two-stage rocket, designed by Orbex aerospace engineers with professional experience from organizations including NASA, ESA, and Ariane, as well as other commercial spaceflight companies.

The 3-D printed rocket engine was uniquely manufactured in a single piece without joins in partnership with additive manufacturer SLM Solutions. Given the extreme temperature and pressure fluctuations involved in space flight, this gives the engine an advantage over other rocket engines, which can suffer from weaknesses associated with joining and welding. It is also the first commercial rocket engine designed to work with bio-propane, a clean-burning, renewable fuel source that cuts carbon emissions by 90% compared to fossil hydrocarbon fuels, supplied by Orbex’s new exclusive BioLPG fuel partner Calor.

Orbex first came into the public eye in July of 2018, when the UK Space Agency announced that Orbex had been chosen to launch from the proposed spaceport in Sutherland in the Scottish Highlands, as part of the main consortium. At that time, the company announced that it had already won £30 million ($40 million) in private and public backing for the project, making it Europe’s best-funded private launch company, straight out of stealth mode.

Orbex also announced that Swiss-based Astrocast SA, has selected Orbex to launch multiple nanosatellites for the development of a planet-wide Internet of Things (IoT) network. Astrocast’s satellite-based IoT network will eventually include 64 nanosatellites, spread across eight strata above the Earth to deliver IoT connectivity across the planet, including regions currently considered remote or inaccessible. One of the leading companies in the European space sector and strategic investor in Orbex, Elecnor Deimos, has also confirmed that it has contracted with Orbex for up to twenty satellite launches.