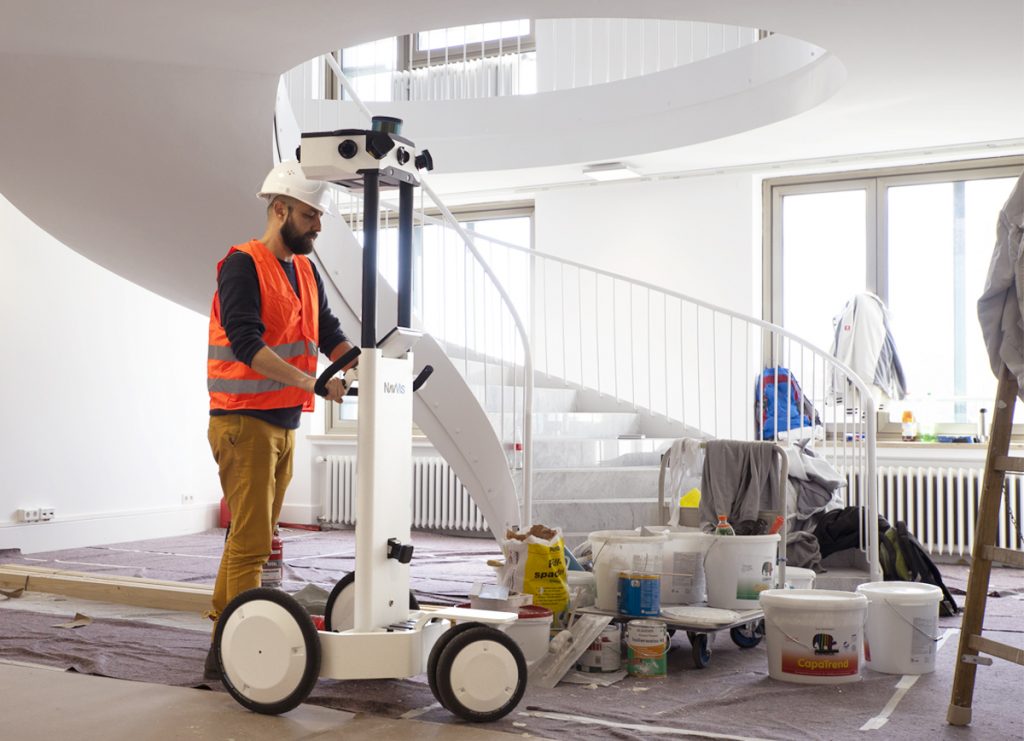 US: NavVis released their M6, a fully-integrated, cart-based system designed for large-scale indoor mapping. The M6 utilizes VLP-16 sensors by Velodyne LiDAR, Inc., which allows it to produce a 3D map of the surrounding environment. Six cameras capture 360° immersive imagery and photorealistic point-clouds, resulting in high-resolution mapped images. NavVis developed this product in response to their customers’ request for a more versatile and sophisticated system which could be used effectively with uneven terrain. In addition to AEC professionals, construction companies and manufacturers can also draw benefits from the higher data quality provided by this enhanced innovation.

The M6 was developed by NavVis after customers requested a system that could navigate a broad spectrum of environments, including rough terrain, both enclosed and open spaces, and even ramps. As part of its efforts, NavVis also produced a system with the capability to capture higher quality data, to replace the work traditionally performed by static laser scanners. The overall goal was designed as an improvement to mobile scanning in general, to elevate the capabilities of the system to fulfill on customers’ needs.

NavVis spent two years developing the M6 to ensure the system contained these characteristics. They were able to accomplish this goal because of Velodyne LiDAR, Inc. sensors. In addition to high quality data that provides imagery containing pinpoint accuracy, Velodyne’s VLP-16 laser scanner is situated, along with three other scanners, to attain optimal scanning coverage, with a range of up to 100 meters and multi-layered scanning capabilities. The M6’s advanced technology also includes 6 cameras, as well as sensors to track Bluetooth beacons, WiFi signals, and magnetic field data.

As Georg Schroth, CTO of NavVis notes, “Following the initial success of our indoor mapping technology, we set out to bring to market the NavVis M6. Our next-generation indoor mobile mapping system was designed and engineered to meet growing demand to use mobile scanning in more complex environments, such as construction sites, where uneven surfaces and slops are more common. This demand drove our decision to include Velodyne LiDAR as a key feature of NavVis M6, enabling multi-layer scanning, with a 360° field of view and a 100m range. The addition of Velodyne has made our innovative 6D SLAM technology possible, which means the NavVis M6 can quickly capture highly accurate data even in complex environments.”

The SLAM element of the system represents the pinnacle of NavVis’s efforts: the system’s simultaneous localization and mapping (SLAM) capabilities exist as an algorithm which can compute data captured by the continuous scanning and high-quality data capture, no matter what type of uneven surface or shifting elevation the system might encounter. In other words, the new M6 system does not presume it is moving along a flat floor as it scans. Instead, the M6 captures the actual characteristics of the floor, including position and orientation of 6 degrees of freedom, which allows for greater data accuracy as well as greater efficiency in the data captured. The SLAM algorithm processes the data from the LiDAR sensors to create the 3D map of the environment.

As Erich Schmidt, Executive Director of Velodyne Europe, observes, “The NavVis application is an excellent example of a company using Velodyne LiDAR technology to provide value-added products and services to a diverse customer base. We are proud to work with NavVis who shares Velodyne’s strong commitment to fulfilling their customers’ needs.”

With the M6, manufacturers can scan at scale on a regular basis. Construction sites can zoom right through the narrowest of spaces. This mobile LiDAR system is capable of high-speed capture of up to 30,000 square meters per day. This feature places its scanning capacity at 30 times faster than stationary devices. Camera placement ensures the invisibility of the operator, whose presence is obscured by placement in a blind spot on the captured images. And for BIM projects or as-built models, this device is designed to serve large-scale indoor mapping projects, including factor planning, and construction monitoring, or to update and create floorplans efficiently and effectively.

Velodyne LiDAR and NavVis have achieved the task of fulfilling customer needs through innovation. Together, the two companies have provided a mobile LiDAR system that surpasses the capabilities of previous products. NavVis’s M6 system utilizes Velodyne’s LiDAR sensors for improved scanning capacity and precision of 3D environmental maps. Even over uneven and rough terrain, the M6 produces high-resolution maps of 360° images, as well as highly detailed and realistic point-clouds. And as time progresses, the mapping software which powers the M6 will be updated in order to best fulfill customer needs with increasingly better data quality.