UK: The UK Natural Environment Research Council has awarded the University of Leeds £5 million to host and lead two national centres for studying the Earth from space.

Scientists in CPOM are gearing up to analyse the first images to be acquired by the European Space Agency's earth observation satellite Sentinel-1A, which is due to be launched on 3 April 2014. The images, expected in the coming weeks, will give scientists the first glimpse of how the polar ice sheets have changed since the demise of EnviSat – Europe's last environmental satellite mission – in 2012.

Meanwhile, analysis of images by COMET, which will look at the motion of the Earth's crust, will take several months before the first results can be announced, as the tectonic plates move much more slowly, from a few to tens of millimetres per year.

Over the next 5 years, COMET scientists aim to measure tectonic strain with unprecedented resolution for the entire planet, measure deformation and gas release at every active volcano, and combine these data with ground-based observations to build new models of these hazardous processes. 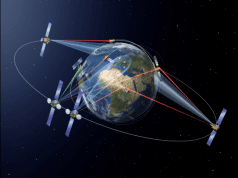