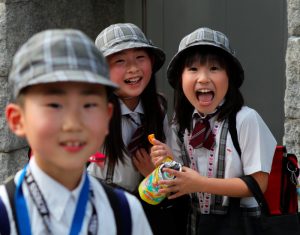 The initiative is rare, but the maps have been used to raise awareness and have been effective in protecting children from traffic accidents on the way to and from school. The prefectural police have compiled a database of traffic accidents resulting in injury or death since 2001, and have accumulated data on accident locations and weather, as well as who was involved in the accidents.

With the Geographic Information System (GIS, see below) users can check different kinds of data on their computer by pointing their cursor to spots where accidents have happened. The prefectural police have collated information on traffic accidents on school routes since 2003. The map integrating the data and school routes has been distributed to more than 800 schools in Chiba Prefecture.

The maps approved by schools are also open to the public on the Chiba prefectural police website. The maps highlight spots where accidents are most frequent, making it easy to determine where it is necessary to install additional traffic lights and crosswalks.