Germany, October 8, 2014: The three-day Intergeo 2014 conference opened in Berlin amid much fanfare on Tuesday, October 7, with Prof Karl-Friedrich Thöne, President of the the German Society for Geodesy, Geoinformation and Land Management (DVW), strongly backing the competitiveness of Germany as a geoinformation hub.

The programme at the 20th Intergeo conference Berlin will focus on discussions about society and the environment, technological trends and product innovations. As the host of Intergeo, the DVW is looking forward to three intensive days of information, discussions and networking in Berlin.

On the night of October 6, the Spandau Citadel was the site of celebrations to mark the opening of the 20th Intergeo, the world’s leading conference trade fair for geodesy, geoinformation and land management. Speaking in front of an audience of invited guests, Prof Thöne launched three busy days of Intergeo. He called uncompromisingly for a consistent national geoinformation and proactive communication strategy. “The core challenge lies in getting important, groundbreaking applications on the market, both in the business sector and in public administration. Access to public data and the cooperation of those in business and administration are a prerequisite for this.”

He spoke out in favour of having a clear, common objective and consciously defining roles. He also said that activating market potential was the top priority in any such considerations. Prof Thöne described Intergeo as an event that brings together players from the administration and business sectors, making it of crucial importance for sustainable development in the field of geoinformation.

“Geoinformation and ICT are fundamental elements and core components of the digital future. The need for close collaboration between both these constituent parts is one example of a human-centric intelligent society,” said Andreas Kleinknecht, member of the management team of Fujitsu Germany, in his opening address.

On October 7, the third national INSPIRE Conference held under the patronage of the German Federal Ministry of the Interior was inaugurated by the Ministry’s State Secretary Cornelia Rogall-Grothe. The conference turns the spotlight on the topic of geoinformation as a catalyst for the information society. German Federal Environment Minister Dr. Barbara Hendricks highlighted the role geoinformation played in tackling climate change.

Today, on October 8, members of the INTERGEO Advisory Board will explore the discussion around ongoing developments in geoinformation as part of the English-language plenary talk “Mobile Future Now”.

The key topics of the conference are shaped by current trends that are influencing society, with presentations and discussions focusing on subjects such as mobility, energy, and land and urban development. As an up-and-coming technology, unmanned aerial vehicles (UAVs) will be a particular point of interest. The UAV Flightzone in the outdoor area at INTERGEO provides a showcase for these flying surveying devices whose main purpose is to supply current geographical image information to assist the decision-making process.

On the third and final day of the conference (October 9), the GeoBusiness Commission of the German Federal Ministry of Economics and Technology will host presentations and discussions on creating value from and making sustainable use of public geodata.

German Vice Chancellor Sigmar Gabriel is patron of the imaGIne-2 conference being held on 8 and 9 October as part of Intergeo. At this event, the European Umbrella Organisation for Geographic Information EUROGI will showcase the standard of the European geoinformation industry under the slogan “GI-Expertise made in Europe”.

In its 20th year, over 500 German and international exhibitors are at Intergeo to display their products and solutions in the field of geodesy, geoinformation and land management. Over 17,000 visitors are expected to attend the event in this anniversary year. 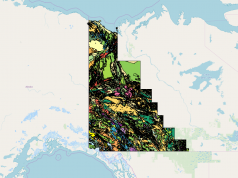