Israel: Intel has announced it has entered a definitive agreement to acquire Israeli sensor company Mobileye for a weighty $15.3 billion. As a result of the deal, Intel’s autonomous driving business will be headquartered in Israel and led by Amnon Shashua, Mobileye’s Co-founder, Chairman and CTO.

Intel’s SVP Doug Davis will have some cause to be slightly aggrieved by the news, as he was tempted out of retirement recently to lead the autonomous vehicles business, but will now report into Shashua. That said, if you’re going to drop $15 billion on a business, you’re probably going to give the top-man a decent position.

“This acquisition is a great step forward for our shareholders, the automotive industry and consumers,” said Brian Krzanich, Intel CEO. “Intel provides critical foundational technologies for autonomous driving including plotting the car’s path and making real-time driving decisions. Mobileye brings the industry’s best automotive-grade computer vision and strong momentum with automakers and suppliers. Together, we can accelerate the future of autonomous driving with improved performance in a cloud-to-car solution at a lower cost for automakers.”

While the acquisition will certainly raise some eyebrows in the IoT world, it shouldn’t come as a complete surprise. Intel and Mobileye have been working together for a while now, having announced a partnership in early 2016 as well as another tie-up with BMW finishing off the trio.

The trio’s ambition is to build a fleet of self-driving cars, not only on highways but also in urban environments, by 2021. The team also claim to be on-track to have 40 vehicles ready for testing on public roads, in both the US and Europe, by the second-half of 2017.

Mobileye also created headlines after its earnings call in July when it announced it was ditching a long-standing partnership with Tesla, arguably one of the world’s most innovative brands. Share prices took a hit at the time, but Intel’s 40-odd percent mark-up on current market capitalization will probably keep them happy now.

The IoT world has long been an ambition of the Intel exec team, as it looks to answer a rather traumatic attack on the smartphone industry, which ultimately resulted in failure. While Intel has long been the leader in the personal computing and data-centre chip market, it wasn’t able to combat the ARM-ecosystem in the smartphone market.

The last 12-18 months has seen Intel invest heavily in the IoT segment, with autonomous vehicles attracting particular attention, as it looks to avoid being late to the game again.

“We created a new organization called the Automated Driving Group (ADG), which will be solely dedicated to innovating the future of driving and designing the next generation of advanced driver assist systems and autonomous driving solutions,” said Murthy Renduchintala, President of the Client and Internet of Things (IoT) Businesses and Systems Architecture Group, back in November.

“Many of you have asked why we think autonomous cars and vehicles are so important to Intel’s future,” said Krzanich in a letter to employees. “The answer is data. Our strategy is to make Intel the driving force of the data revolution across every technology and every industry. We are a data company. The businesses we focus on, and deliver solutions to, create, use and analyze massive amounts of data.”

The creation of the new division add credibility to the $250 million commitment made by Intel’s venture capitalist business at the LA Auto Show’s AutoMobility conference earlier on in November. The chip-battle in the autonomous vehicles space is starting to heat up with Qualcomm and Nvidia also make positive strides forward, though the Mobileye acquisition would most certainly add extra computer vision capabilities to Intel’s cause. 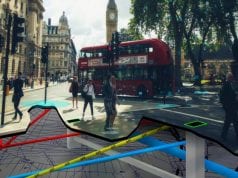