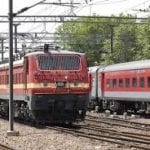 The official said that the system was implemented on January 8, on some of the mail or express trains on the Shri Mata Vaishno Devi Katra-Bandra Terminus, New Delhi-Patna, New Delhi-Amritsar, and Delhi-Jammu routes.

He further said that the new system will help railways to modernize its control room, railway network for more efficient train movement across its network.

After the collaborative effort of ISRO and Indian Railways, a satellite-based system will also help railways in mapping the area as well as it will come in handy at the time of accidents when it can be used to ascertain the exact location of trains and topography.