India: India’s latest navigational satellite IRNSS 1-B will be launched onboard PSLV C-24 rocket from the spaceport at Sriharikota on March 31. There would be a two-and-a-half day countdown which would be preceded by a launch rehearsal on March 26, according to a spokesperson from Indian Space Research Organisation (ISRO). The launch of IRNSS 1-B from the Satish Dhawan Space Centre at PSLV C-24 rocket is scheduled at 5.20 pm on March 31, 2014.

This is the second of the seven satellites planned for Indian Regional Navigational Satellite System (IRNSS), whose applications include terrestrial and marine navigation, disaster management, vehicle tracking and fleet management. ISRO had launched IRNSS 1-A, the first in the series, on July 1 last year onboard its workhorse Polar Satellite Launch Vehicle (PSLV) C-22. IRNSS is similar to US’ Global Positioning System (GPS), Russia’s GLONASS and Europe’s Galileo. China and Japan too have similar systems named Beidou and Japanese Quasi Zenith Satellite System respectively. 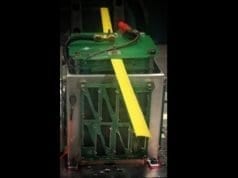