The India Geospatial Forum 2012 (formerly called Map India) was held from February 7-9, 2012 at Gurgaon, Haryana in India. The Forum turned out to be extremely successful with thousands of people registering for the event. Delegates from nearly all parts of India, both from industry and government, participated in the 3-day event. Discussions were held over a number of issues ranging from data policies to the future of the geospatial industry in the country. This was the first time that besides the main session, two parallel conferences – on infrastructure (Geo-Infra) and governance (Geo-Gov) were held at the forum. Some of the major topics debated during the event are: G-tech in India
Geospatial technology is fast becoming an engine of growth for businesses and is poised to become a formidable driving force in the global as well as Indian economy. Today, the Indian government is trying to bring e-governance and geo-Governance together. Talking of the rapid pace at which development is happening in the country, Dr Shailesh Nayak, Secretary, Ministry of Earth Sciences, Government of India, said that the country’s rapid progress demanded robust information and decision support systems to aid the planning and implementation of various developmental programmes. “GIS will be the mainstay around which such information and decision support systems can be built,” he said.

Saumitra Chaudhuri, Member, Planning Commission, Government of India, called for increased use of geospatial technology. “GIS can help us in achieving better and productive living for our people. There is a lot of opportunity to use these technologies in different fields and make sure that better results are achieved.” 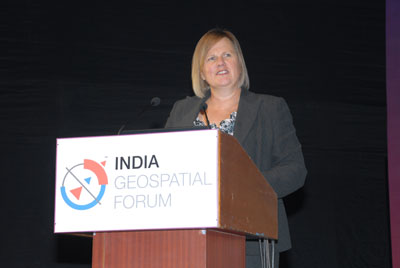 Disaster management
Anil Kumar Sinha, Vice Chair, Bihar State Disaster Management Authority, Government of Bihar said that any major disaster that strikes a country lends a significant blow to the GDP and thus it affects the process of sustainable development. “The most important aspect is how can geospatial technology help mitigate the effect of disasters,” he said.

Observing that India is one of the most disaster prone countries in the world owing to various hydrometeorological and geopolitical factors, B B Bhattacharya, Member, National Disaster Management Authority, said that while natural hazards cannot be averted, its effects can be mitigated and this is where disaster risk management programmes have a very significant role to play. The most important tool in disaster resilience according to him is digital cartographic base of the country at right scale and contour.

GIS in mining sector
Perthi, Secretary, Ministry of Coal, Government of India, gave a comprehensive overview of the mining sector in the country and explained how geospatial technology can be effectively used to evolve new ways of exploration and thus increase production. He said that although the country has increased its drilling capacity significantly over the past few years, it was not enough and there is need to use modern techniques to ensure mining in a sustainable manner. “Geospatial technology has a very important role to play in this area as it can be used to locate minerals below the surface of the earth.” He also said that geospatial technology can play a major role in all the three aspects of the industry – exploration, mining and closure. Land administration
Land titling in India is a challenge of enormous proportions owing to the mammoth area that needs to be covered and the size of population, indicated John Whitehead, APAC Manager, Emerging Markets and Funded Projects, Trimble, Singapore as he brought to light the most serious challenge facing effective land administration in India. Experts debated about the current state of land administration in India, the urgent need to modernise and computerise land records and how geospatial technology can be used to ensure more effective land tenure systems.

The National Land Records Modernisation Programme (NLRMP) remained a major point of deliberation during the event with several speakers citing it as an example of notable work done in the field of land management in India. Talking about the programme, Prabhu Dayal Meena, Additional Secretary, Department of Land Resources, said that there was a rapid progress in the direction with some states having stopped the use of manual recording altogether. He also informed the audience about the ministry plans to setup a National Institute for Land Management (NILM) which will work to build capacity in the area and educate states on evolving policy level guidelines.

Geo-Gov
“GIS is not for the sake of technology, hardware, software or even applications. GIS is meant for common man on street. The benefits of the technology should reach the last mile otherwise it is not of much use,” said Anoop Singh, Special Secretary to Government, Information Technology and Communications Department, Government of Andhra Pradesh.

Talking about smart governance, Kaushik Chakraborty, Country Head – India & SAARC, Intergraph SG&I India remarked that smart governance is about people, processes and technology. One big challenge according to him in the pervasiveness of GeoICT is the collaboration between various agencies. To enhance the pervasiveness of GeoICT, he suggested having integrated and consistent data sets rather than discrete datasets, empowering NSDI and state SDI, and use of more open standards.

Geo-ICT in agriculture
Agriculture today has remote sensing data, statistics, maps, different survey reports, web, internet, various agencies producing data related to agriculture, state reports, district reports, mobile phones – all of which were not there or hardly there at the time of Green Revolution, observed Dr Prithvish Nag, Vice Chancellor, MG Kashi Vidyapeeth, India. Such an evolution requires higher skills in agricultural management, and this is where GeoICT has a role to play. He further added that this role is at two levels – production level (providing information on what and how much to produce) and at policy level.

Dr Vinod Bothale, Director, Maharashtra Remote Sensing Application Centre, remarked that there is very less land available for agriculture in India, while the demand for yield is increasing with growing population. Also, agriculture, which is the largest source of employment in India, is also the slowest growing sector. He said that farmers who understand market trends and market opportunities have a better chance of succeeding than those who don’t. All of this requires lot of information. This is where geospatial information and technology has a role to play.

Meanwhile, M. Moni, Deputy Director General, Agricultural Informatics Division, NIC, spoke about the need to develop user friendly systems that speak the language of farmers. He opined that there is a need for agriculture governance system and that is where GIS has a role to play.

Sharing her vision on the future of GIS in health services, Dr Madhulekha Bhattacharya, Professor and Head, Dept of Community Health, Acting Director, National Institute of Health and Family Welfare, said the need of the hour is to have a GIS hub at the district level with multi-sectoral data sets for analysing and presenting the data to the district and health administrators for use and support functions.

Geo-ICT in forestry
AK Wahal, Director General, Forest Survey of India, Ministry of Environment and Forests, Government of India, informed audience about the establishment of National Forestry Information System in the country that aims to be a decision support system for the planning processes in environment and forestry. The system envisages creation of a node at Forest Survey of India (FSI) that would have all layers of information related to forests in the country. Some nodes would also be at state forestry headquarters, and all the nodes will be linked. The system is set to become operational from the next financial year. Atul Kumar, Chief General Manager (P&IS), NHAI, India, talked about national highways in India and the importance of imagery in carrying out road-related projects. “High resolution satellite imagery can be used for determining the exact status of projects, evaluating the progress of work, etc. GIS and satellite technology can be used for building design of highways, road asset management, planning of projects etc.,” he said.

Dr P K Sikdar, President, ICT Online, India, spoke about the benefits of geotech in highways. “GIS can be used throughout the lifecycle of a project. It can be used for transportation planning, construction management, transportation safety analysis, environment management and so on,” he said.

Dimensions and directions of geospatial technology
In the financial year 2010-11, National Remote Sensing Centre (NRSC), India, surpassed its sales target. In the near future, the Centre is set to launch two polar satellites RISAT-1 and SARAL and two geostationary satellites INSAT-3D, GISAT. Amongst these four satellites, GISAT will be launched in 2013. However, the remaining three satellites will be launched in 2012, according to Dr. V K Dadhwal, Director, NRSC, India.

Offering industry perspective, Rajesh Mathur, Vice Chairman, Esri India, highlighted a market report by Gartner which rated cloud as the technology highly appreciated by the industry. Elaborating on the untapped potential of cloud, he stressed that the market for cloud will touch USD 118 billion by 2014 and will reach USD 241 billion by 2020, according to Forrester.

Wide accessibility, no need of GIS software, enabling users to directly manipulate maps and GIS data over the Web are some of the key features which make WebGIS popular amongst users, observed scientist Kapil Oberai from Indian Institute of Remote Sensing (IIRS).

Mahalakshmi Narayanan, Principal System Analyst, NIC-TNSC, India, highlighted the advantages of geospatial services oriented architecture like easy administration of maps (as the changes on maps would be required only once and in only one database); technology can be leveraged by application developers who have very little knowledge of GIS; and so on.

Challenges
One of the major challenges facing the world in the near future is lack of skilled manpower. Speaking about it, Ashutosh Pandey, Managing Director, CSR India, pointed out towards the need to introduce technology in a way that the youngsters are able to better associate with it and thus use it for the growth of the nation.

Conclusion
The India Geospatial Forum concluded on a positive note with Arun Goel, Joint Secretary, Ministry of Urban Development, urging the planning commission to make GIS compulsory for every city development plan (CDP). He informed that the ministry was looking at geo-data on a very big level in the 12th Five Year Plan.