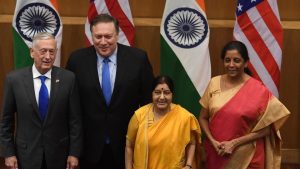 India and the US signed a new geospatial technology sharing agreement , Communications Compatibility and Security Agreement (COMCASA). The countries’ first bilateral dialogue of this nature featured India’s Defence Minister Nirmala Sitharaman and Foreign Affairs Minister Sushma Swaraj along with their US counterparts – Defence Secretary James Mattis and Secretary of State Mike Pompeo. This is one of the four foundation agreements the US signs with its allies.

Under the Communications Compatibility and Security Agreement (COMCASA), India will be given access to a host of US military technologies like advanced drones and communication platforms. For example, India’s US-sourced maritime patrol aircrafts will be outfitted with technology that enables direct communication with the US military and the sharing of live satellite feeds. India could also have direct linkages with US allies that use similar equipment.

COMCASA is a standard bilateral agreement, it was specifically modified to cater to Indian concerns. The US assured India complete access to all equipment it supplied and said it wouldn’t share any sensitive data culled from US-origin military and communication systems in India with any third parties. It also pledged to give India an advance warning of six months in the event that communications had to be severed.

Besides keeping the pressure on Pakistan to curb terrorism, the major impetus behind the ramping up of military cooperation between the two countries seems to be China’s expansionism across Asia. This can be seen in China’s Belt and Road Initiative as well as its maneuvers against smaller nations in the South China Sea. In an increasingly polarised world, the US needs to know it has a friend it can count on in South Asia.

The COMCASA will be valid for 10 years, after which its renewal will be negotiated. It is the second of three “foundational agreements” that the US signs with its military allies. The first one is the Logistics Exchange Memorandum of Agreement (LEMOA), which allows the signatory access to resources from US military bases and vice versa. India has already signed this. The third one is the Basic Exchange and Cooperation Agreement for Geo-spatial Cooperation (BECA), which facilitates the unconditional sharing of geospatial data. India and US are yet to begin negotiations on this.

As a complement to COMCASA, a hotline will also be established not only between the countries’ defence and foreign ministers but also between the US Naval Forces Central Command (NAVCENT) and the Indian Navy in the interest of security in the Indian Ocean.