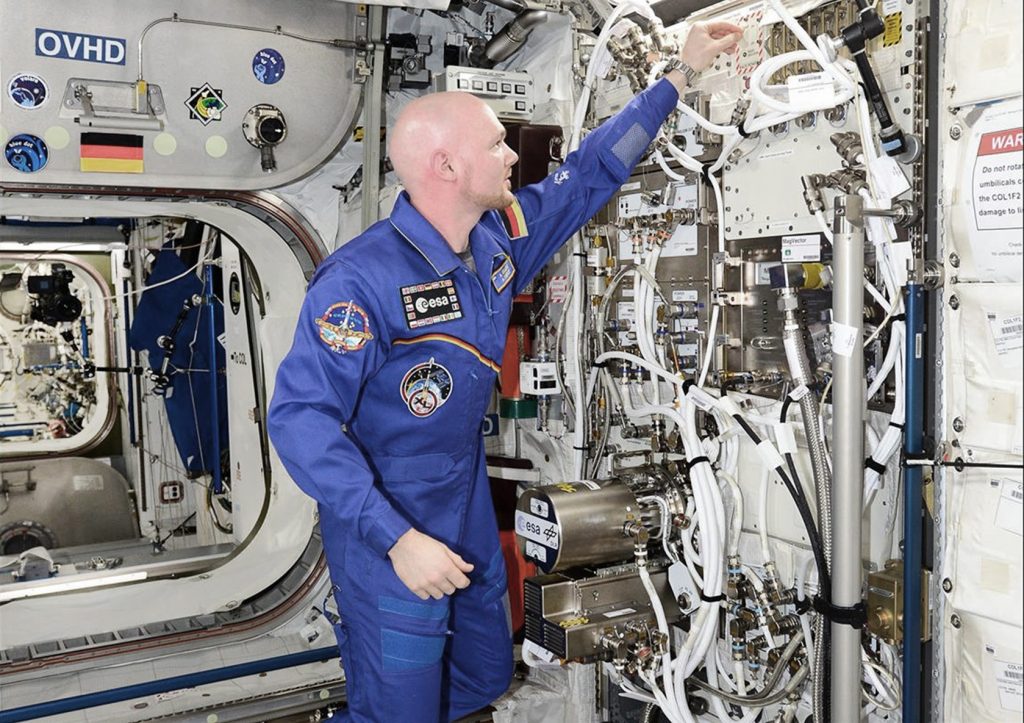 Germany: German astronaut Alexander Gerst will set-up the HSC-OS (High Speed Camera Operating System), a small but powerful electronic upgrade to control the Electro-Magnetic Levitator’s (EML) high-speed video camera and rapidly process the enormous volume of data it generates. Airbus has developed this component on behalf of the German Aerospace Center´s (DLR) Space Administration. This science “booster” – scheduled for launch with Orbital Antares 9 Mission – will be integrated into the EML facility on board the ISS during the European Space Agency’s Horizons mission, which will last until the end of 2018.

Airbus´ new concept uses advanced commercial microcomputer boards, that were specially adapted and qualified for use in Space, increasing the transfer speed from the camera to the computer system by a factor of 10. Moreover, a special hardware-based data compressor, integrated in the commercial microcomputer, replaces the previous, software-based concept, reducing compression times by factors of 60 or more. Both measures significantly increase the data throughput of the system.

The Electro-Magnetic Levitator is a much lauded experimental facility in the Columbus laboratory of the ISS. Funded by ESA and DLR´s Space Administration, it was developed and built by Airbus. It was launched on board the ATV-5 in August 2014, and Alexander Gerst installed the EML during his first stay on the ISS in autumn 2014. Now Gerst is also scheduled to install the data electronics this summer – an important enhancement to the EML that will enable the researchers to pursue scientific excellence with even greater efficiency.

This facility aids researchers in conducting scientific experiments on small metal samples, allowing them to determine important material parameters with extreme precision. These, in turn, are crucial for optimising industrial manufacturing processes on Earth, to produce better metallic materials with customised properties.

Metal samples are melted and heated to temperatures of up to 2,100 degrees Celsius and measurements are taken in the molten state. Samples are then solidified in a controlled manner. As hot molten metals are extremely chemically reactive, each sample is processed containerlessly by placing it without a crucible in an electromagnetic field, causing them to be positioned and heated by induction. All measurements must therefore also be taken using non-contact optical methods.

The EML’s sophisticated measurement and processing technology also includes a high-speed video camera that films these rapid processes, on the levitating molten metal sample, at more than 30,000 frames per second.

Since operations commenced, many experiments have been conducted (>1,200 cycles of melting and solidifying) and enormous volumes of data collected (>13 TB) – mainly video data.

“It became apparent fairly soon after commissioning that the mission capacity is dependent on the time it takes to process the huge amounts of high-speed video data,” said Wolfgang Soellner, who is responsible for EML experiment design at Airbus. “This was due to an enhanced utilisation concept that produces significantly more data than the mission studies had planned for. The upgraded video data processing will eliminate this bottleneck in the experimental procedure.”