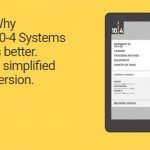 US: Trimble has acquired privately held 10-4 Systems, a provider of advanced, multimodal shipment visibility solutions and related technologies for shippers and transportation providers. 10-4 solutions offer real-time shipment visibility to shippers, third-party logistics providers and carriers of all sizes. The acquisition expands Trimble’s portfolio of Transportation Management Systems (TMS) to include an established cloud-based solution for small carriers as well as a shipper RFP platform…(Read more) 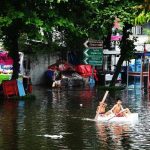 Australia: CSIRO’s Data61 Australia’s data innovation network and Radiant.Earth have announced today that they will partner to undertake joint research into satellite imagery and earth observation data for disaster resilience. The research will help in areas like human disaster management, health, climate change and sustainable water management. A recent report by the United Nations found 41% of all disasters caused by natural hazards reported over the past two decades…(Read more) 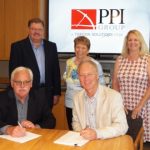 US: Topcon Positioning Group announces a new addition to the Topcon Solutions Store distribution network. PPI Group, a Topcon Solutions Store, is the latest positioning distributor to join the network with two locations in Portland, Ore. and Kent, Wash., bringing the total to 13 locations in North America. “The addition of PPI Group to the network comes with longstanding, well-regarded customer support and business growth in the Pacific Northwest, and offers more than 90 years of experience…(Read more) 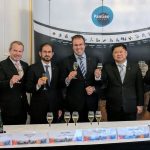 US: The PanGeo Alliance has announced Geoinformation Systems of the National Academy of Sciences of Belarus as the latest new member of the alliance. In addition, PanGeo is celebrating 3 years since its launch in Paris, as all the members gathered in the French capital to commemorate the formation of their collaboration and to evaluate its results and look to the future. The current space assets of the new member include a new multispectral sensor, BKA-1, with a spatial resolution…(Read more) 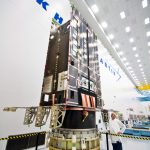 US: On July 13, Lockheed Martin’s second, fully assembled GPS III space vehicle (SV) completed a realistic simulation of its future launch experience and passed this critical acoustic environmental test with flying colors, the company said. During acoustic testing, the GPS III SV02 satellite was continuously blasted with sound reaching 140 decibels in a specialized test chamber equipped with high-powered horns. For comparison, that is about as loud as an aircraft carrier deck and human hearing starts…(Read more) 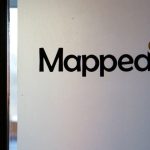 US: Indoor GIS and wayfinding technology firm Mappedin announced a new collaboration with Apple to export its mall customers’ data to Apple Maps. “Representing some of the world’s leading REITs and mall owners, Mappedin’s customers can now easily make updates to property data across their wayfinding platforms (websites, kiosks, apps) and have that information reflected in Apple Maps on shoppers’ iPhones or iPads,” said company. Using Mappedin’s platform…(Read more)

NASA’s satellite images, a tribute to 9/11 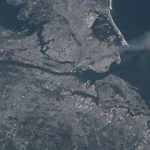 The world got a rude shock sixteen years ago on September 11, 2001. Terrorist outfit Al-Qaeda shook the US soil by launching deadliest attacks that crashed planes into New York City’s World Trade Center, the Pentagon in Washington, DC, and a field in Pennsylvania. While the devastation was enormous and people could keep a track of the new developments bit-by-bit through intense media coverages, the whole event could also be seen from the space as well. One such example is…(Read more)

Check Out the Coolest Autonomous Cars Designed so Far

Make way for the smartest, coolest autonomous cars that are either ruling the road or are soon going to. Premiered in Shanghai, China in April, this concept car is all about intelligence. At the touch of a button it runs around, completing errands like driving children to school, taking parents to office, looking independently for a parking space, picking up a visitor from the station, in a jiffy. With suave features like voice control, control through a smartphone app, a two-part swivel…(Read more)