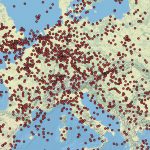 US: Ball Aerospace is developing a cloud-based content library and visual-data repository called VizZen, for government and commercial customers. To develop this, the company is using the expertise it gained while building sophisticate sensors and by merging various data sets…(Read more) US: Esri has entered into an enterprise agreement with the North Atlantic Treaty Organization’s (NATO) Communications and Information (NCI) Agency earlier this year. The enterprise agreement for the NATO Core Geographic Information System (GIS) includes several addendums to cover the use of Esri software by NATO Functional Area Services (FAS) and NATO Nations…(Read more) US: The United States Geospatial Intelligence Foundation (USGIF) has announced the 2017 recipients of its annual awards program. Award winners were recognized on the main stage at USGIF’s GEOINT 2017 Symposium, taking place from June 4-7, at Henry B. Gonzalez Convention Center…(Read more) The world population is expected to increase to 9.1 Billion by 2050 and with that, the demand for food is expected to grow by 70% by 2050. As of today agriculture productivity is stalling…(Read more)