Fugro has bagged a contract to provide GNSS-based rig positioning services to Statoil Petroleum AS. The contract includes positioning of all the Statoil operated rigs on the Norwegian continental shelf and associated Statoil vessels. Fugro’s specialized satellite positioning systems, which utilizes all available navigation satellites (GPS, GLONASS, Beidou and Galileo), will be permanently installed…(Read More)

US: STMicroelectronics has launched a multi-frequency GNSS receiver chipset suitable for safety-critical automotive applications and high-accuracy positioning at the decimeter and centimeter-level for precise point positioning (PPP) and real-time kinematic (RTK) applications. Conventional in-car navigation systems help drivers reach their destinations using receivers and commercial satellite services that allow positioning accurate to within a few meters. With increasing use of autonomous systems…(Read More)

US: Over 95 percent of projects in the process industry are retrofits or expansions of existing plants that seek to increase capacity, comply with regulations, or introduce new technology to improve performance. Moreover, often the building of a new plant is done on the brownfield site of an existing facility. For all these projects, capturing and modeling the existing context is critical to decision making…(Read More)

UK: Aerial mapping company Bluesky has completed a research project backed by the UK government’s innovation agency, Innovate UK, to develop the use of mobile phones for capturing accurate 3D spatial information. The nine-month research project focused on the use of standard smartphone technology to capture and calibrate video footage, and then convert it to 3D information. Designed for electricity Distribution…(Read More)

Two of ESA BIC Sweden’s incubators have been ranked fourth and seventh in the world classification of university-affiliated business incubators among 259 evaluated in 53 countries. ”Being top rated in the world shows that we here in the North are at the forefront and it feels great,” said Jens Lundström, CEO for Arctic Business Incubator (ABI) and Manager of ESA Business Incubator Centre (ESA BIC)…(Read More)

Digital billboards to enable location-based targeting on taxis in Sydney

Australia: Cab Digital Media has partnered with Australia-based telecommunication company Telstra to launch ‘TaxiLive’, a real-time digital billboard mounted on the back of Sydney taxis. Sydney based startup Cab Digital Media is launching TaxiLive, a 32-inch digital platform displaying safety messages, weather reports, and advertising from the rear of premium taxis. The service is GPS enabled, and remotely controlled by Cab Digital Media, supported by the Telstra network…(Read More)

Various use of drones: This is how UAVs are changing our lives 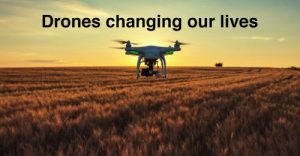 When Amazon first used a drone to deliver its product in December 2016 no one thought that it would be a gigantic step for the drone industry. Drone industry has grown many folds since then. According to a report, there are more than 1 million drone users in the US alone. Let’s try to understand the various use of drones. The Economic Impact of Unmanned Aircraft Systems Integration…(Read More)

Location data sharing: What are the concerns around privacy?

With an exponential increase in connectivity, ubiquitous cameras and sensors, there is a huge amount of data being produced every moment. While it can benefit companies in a big way by capturing in using this data in innovative measures, customers or common man feel a threat to their privacy. However, there is also a growing trend where customers are increasingly sharing their location data with map…(Read More)

The adage that ‘The more things change, the more they remain the same’ may hold to be true in a lot of many circumstances, but certainly not in the case of a technological breakthrough with far-reaching implications for the society, the economy as well as well as lifestyle changes of individuals. The disruption that autonomous vehicles will wreak in the segment of automobiles will unleash all of these radical transformations and set in motion a chain reaction impacting everything from individual…(Read More)