Geospatial World announced and presented its annual Geospatial Leadership Awards at Geospatial World Forum on May 10. The awards seek to recognize individuals and organizations behind remarkable leadership, transformations and innovations.

This year, the awards were drawn from open nominations and selected by a panel of jury comprising eminent industry stalwarts.

For decades, Tim Trainor has made tremendous service and contribution towards integrating geography and census at national and global levels. His advocacy for its combined value in overall socio-economic development is nothing less than exemplary. Throughout his illustrious career at the U.S. Census Bureau, Trainor played a central role in exploring methodological, technical and substantive issues relating to the creation, collection and integration of geospatial and statistical information. He led the implementation of geospatial technology and process improvements for the U.S. 2020 Census, helping the Bureau save hundreds of millions of dollars. Trainor also contributed towards the inception and development of the UN Global Geospatial Information Management community, where he served as its Co-Chair. Post his retirement from the U.S. Census Bureau, Trainor continues to support the international geospatial community and currently serves as President of International Cartographic Association.

Kailash Satyarthi has been a tireless advocate of children’s rights globally for more than four decades. His fearless and unrelenting policy advocacy efforts towards elimination of violence against children have resulted in path-breaking legislations globally, most notably the International Law on Worst Forms of Child Labour Convention, 1999. He has addressed the United Nations’ General Assembly, International Labor Conference, UN Human Rights Commission, UNESCO and several Parliamentary Hearings and Committees around the globe. In 2014, he was awarded the Nobel Peace Prize for his lifetime of struggle against the exploitation of children and young people, and the right of all children to education. For his incredible perseverance to uphold the rights of marginalized and victimized children across the world, Kailash Satyarthi is a Change Maker for humanity.

An economist with exceptional passion for sustainability. Kate Raworth introduced the concept of Doughnut Economics to challenge the conventional notion of economic growth. The concept promotes inclusive and sustainable economic development without pushing the planet past tipping points that would have huge environmental and social consequences. Doughnut Economics focuses on investing in the human, natural and social wealth that is the backbone of the economy. The concept has been adopted at the center of the economic strategy of major cities such as Amsterdam, Portland, and Glasgow. Kate Raworth is advancing sustainability through her leadership role in the field of Circular Economy focusing on the 21st Century’s unique social and ecological challenges.

Nadine Alameh became the first woman CEO of the Open Geospatial Consortium (OGC) in 2019. A strong advocate of more women in STEM, Alameh has also been vocal about the difference in opportunities between men and women in the geospatial sector. Since taking over, she has restructured OGC by focusing on diversity and inclusivity. Her multilingual and multi-cultural background help her to bridge the gaps between diverse people, data and technologies. Her passion to break diversity and interoperability barriers in the industry is truly inspiring, and that makes her a Diversity Champion.

National Geospatial Agency of the Year – State Service of Ukraine for Geodesy, Cartography and Cadastre (StateGeoCadastre)

The State Service of Ukraine for Geodesy, Cartography and Cadastre (StateGeoCadastre) has pushed the boundaries of how geospatial services are delivered and increased benefits to citizens. In 2020, Ukraine’s law on NSDI was finally adopted by the Ukrainian Parliament after more than 10 years and four attempts. The law is fully in line with INSPIRE and reflects the main principles of EU open data policy. Together with the Research Institute for Geodesy and Cartography, StateGeoCadastre has developed the portal for the NSDI pilot project. The ‘single window’ for natural resource management helps save budget funds and develop territories, strengthen public control over the activities of state bodies and increase public confidence in the government.

The Australian Space Agency (ASA) provides national policy and strategic advice on the civil space sector. The Australian Civil Space Strategy 2019-28 outlines a staged plan to diversify the economy, triple the size of Australia’s space sector and grow an additional 20,000 jobs by 2030. In 2022, the Australian Government announced a National Space Mission for Earth Observation program to design, construct, launch, and operate four new Earth Observation satellites. The ASA leads the program in partnership with other Australian agencies. The ASA is lifting the broader economy and improving the lives of Australians by strengthening space policies and regulatory framework.

Startup Company of the Year – Synspective

Founded in 2018, Synspective is steadily moving forward to achieve its aims to build a SAR constellation of six satellites by 2023 and 30 satellites by the late 2020s. Synspective combines small satellite technologies and big data analytics to understand human economic activity and global environmental change. The company believes that the datasets generated will be significant in international efforts to achieve the SDGs. Synspective has launched two satellites: StriX α in December 2020 and StriX β in February 2022. With a total of USD200 million raised so far, the company is among the largest startups in Japan in any industry.

Geospatial Innovator of the Year – GHGSat

GHGSat’s technology was designed to solve a unique problem – the measurement of facility-level greenhouse gas emissions, anywhere in the world. The company launched the world’s first high-resolution satellite capable of measuring two greenhouse gas (CO2and CH4) emissions from industrial facilities globally and is providing data with better accuracy at a fraction of the cost of comparable alternatives.

Jet Propulsion Laboratory (JPL) is a federally-funded R&D center managed by Caltech for NASA. JPL spacecraft have flown to every planet and the Sun to understand humans’ place in the universe and search for the possibility of life beyond Earth. While JPL searches for life in the universe, they develop technology to improve life on Earth. JPL scientists study Earth’s changing climate, focusing on icy regions, water movement between sea, air, and land; greenhouse gases; and the world’s ecosystems. Many of the Laboratory technologies are licensed for health, public safety, and communications purposes. FINDER, a radar instrument has been used to find people trapped by natural disasters.

Geospatial World Forum is one of the most prestigious global geospatial conferences and annual gatherings of geospatial professionals across the world. This year’s edition GWF 2022 runs from May 10 to May 12 at the Taets Art and Event Park, Zaanstad, Amsterdam. The three-day conference is produced by Geospatial World and co-hosted by Dutch Kadaster.

Geospatial World is a global think tank working towards raising awareness around the use of geospatial data and technologies among governments and policymakers, businesses, and the public at large. Its mission is ‘Making a Difference through Geospatial Knowledge in World Economy and Society’. Primarily a knowledge organization, Geospatial World pursues thought leadership, policy advocacy and technology evangelism through various activities and platforms. 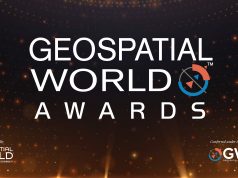 Innovations in Land Administration for Investment and Sustainable Growth