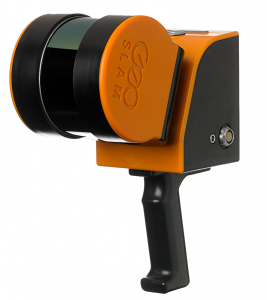 UK: The latest innovation from geospatial mapping and monitoring technology specialist, GeoSLAM has been announced with the launch of the ZEB-HORIZON.

Officially unveiled at this year’s INTERGEO, the ZEB-HORIZON is the next generation of handheld 3D laser scanners, capable of rapidly capturing intricate indoor and outdoor measurements from up to 100m away.

The ZEB-HORIZON, which complements the existing ZEB range, is the first new product from the geospatial mapping and monitoring technology specialists, following its successful merger with 3D Laser Mapping.

Harnessing the power of SLAM (simultaneous, localisation and mapping) technology, the ZEB-HORIZON’s advanced capabilities can be deployed for both indoor and outdoor use, without the need for GPS.

Its versatility also allows the scanner to be mounted on drones for aerial surveys in difficult-to-reach or potentially hazardous locations, backpack integration with a panoramic camera for enriched point clouds, a pole option for elevation and cradle for lowering below ground.

Ideal for the construction, architecture, engineering and surveying industries, the ability to use the ZEB-HORIZON across both indoor or outdoor scan locations is set to shake up the 3D mobile mapping market.

Commenting on its launch, GeoSLAM founder and director of innovation, Graham Hunter said:

“INTERGEO is one of the most important events in our industry calendar, so it seemed fitting that we should officially unveil the ZEB-HORIZON here.

“This announcement is thanks in part to our recent merger, which has meant we are now able to use our combined experience in international distribution, innovation and R&D to deliver the next generation of products to clients in an incredibly wide portfolio of industries.

“This year, we are hosting the biggest stand at the INTERGEO event, and are looking forward to showcasing all of GeoSLAM’s monitoring and mapping solutions in one place.”

ZEB-HORIZON’s release comes as GeoSLAM appoints a new CEO, Shelley Copsey, who has relocated from Data61 in Australia to bring her expertise of high growth technology companies.

“It’s a privilege to join GeoSLAM at this really exciting time. I’ve worked alongside the business for a number of years, but I’m delighted to now be formally part of the team. The launch of ZEB-HORIZON and the new UAV capabilities are set to revolutionise how SLAM contributes to a businesses’ data collection.”

GeoSLAM’s latest unveiling includes an innovation that integrates with NCTech’s iSTAR Pulsar 360-degree data capture system, a collaboration which will be showcased at INTERGEO