UK: GeoSLAM will demonstrate how its ZEB-REVO RT handheld laser scanner can be used to slash the time and cost required for complex indoor 3D mapping on construction sites at the 2018 Association of General Contractors of America (AGC) Convention. The conference and exhibition will be held February 26-28 in New Orleans.

In addition to live demonstrations of the ZEB-REVO mobile scanner and real-time SLAM processing software, GeoSLAM will highlight a recent case study where a major U.S. construction firm captured geospatial scan data in just 10 minutes to create an accurate 3D building information model (BIM) for a complex space at one of its project sites. With traditional scanning technology, the data capture would have taken eight hours.

“AGC attendees who visit our booth will quickly understand why the Architecture Engineering and Construction [AEC] sector is the fastest growing market for GeoSLAM mobile mapping technology,” said Robby Dudley, GeoSLAM NAFTA Channel Manager. “The bottom-line benefit of the ZEB-REVO package for general contractors is that 3D mapping can be fast and easy without loss of detail.”

GeoSLAM introduced the ZEB-REVO RT in late 2017 as the next generation in its line of lightweight, durable mobile laser scanners. Weighing just 2 pounds, the handheld device enables users to capture high-quality scan data at walking speed. The ZEB-REVO RT is also ideal for mapping tight and hard-to-access spaces, such as inside drop ceilings. The device uses WiFi to seamlessly connect the scanner to a mobile phone or tablet, allowing for real-time data visualization as the user works, eliminating the need for post-processing.

“We offer a ‘go-anywhere’ 3D mobile mapping solution that simplifies the production of BIM models,” said Dudley. “Our sales increased 300 percent last year, and most of that growth occurred in the construction, surveying, engineering and facilities management sectors.”

GeoSLAM will be offering live demonstrations and handing out case study flyers in booth #411 at the AGC Convention being held February 26-28, 2018, at the Hyatt Regency in New Orleans, La. 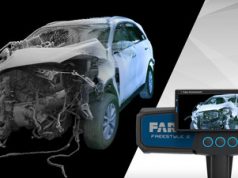