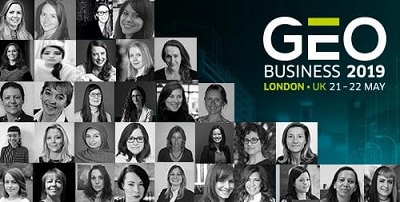 UK:The geospatial sector has long been strongly male oriented. This year the organisers of the sector’s No 1 show and conference taking place in London on the 21-22 May are highlighting the increasing opportunities for women through the careers and business experience of female leaders and high achievers. One session in the 22 seminars at GEO Business has no less than five female speakers. Over half of the sessions have at least one female speaker.

Much of the sector’s businesses have traditionally revolved around surveying for dimensional control in construction and for mapping. In the past this has meant long periods of site work and overseas postings, often to inhospitable places. All factors which are a deterrent to women, let alone family life.

Things began to change with the arrival of high-resolution web mapping and imagery, GIS (Geographical Information Systems) and rapid data collection technologies; meaning more work at the desktop and site visits that can often be done in a day or so. There are also growing opportunities in developing aps enabled by mapping, position and place, as well as geospatial services for things like transport, utilities and infrastructure, autonomous vehicles and phones.

In a seminar session at GEO Business on Floods, no less than five female speakers will address the subject. They include Elena Puch of Ambiental Risk Analytics; Dr Pippa Malmgren, Co-Founder H Robotics and one of the Top 100 Women in Tech; Marion Le Massion, Digital Product Manager, Thales; Alexis Hannah Smith, CEO IMGeospatial – one of the Top 11 Female Leaders in Geospatial Globally; and Alison Matthews, Head of Geomatics at the UK’s Environment Agency, who leads a team of technical specialists in capture, processing and analysis of spatial data from ground based sensors as well as aerial, drone and satellite platforms.

Collaboration and diversity is key

Alexis Hannah Smith curated the Floods seminar with an emphasis on giving a platform to women with different levels of experience, ages and backgrounds.  As an entrepreneur, also an executive board member of the World Geospatial Industry Council, where collaboration and diversity is key, what advice would she offer to young women contemplating a career in the sector?

“The best advice I would give is to be conscious of the important role that you will be able to play in curbing bias and to use your points of difference as an advantage.  With artificial intelligence, big data and automation integral to the geospatial sector in the future, it’s incredibly important that there is diversity of all kinds – not just gender, but age, ethnicity, sexuality, autism etc, in the planning, implementation and quality assurance of tools, which we generate to avoid inherent bias.”

She singles out, “Algorithms with bias for selecting male CVs over female ones in the automated short-listing of job applicants, and photo algorithms incorrectly identifying non-white faces are two widely reported examples.  Think about what you’re doing and the way that you’re doing it, instead of just following everyone else.”

Dr Anne Kemp is one of leading experts and thought leaders on GIS and BIM (Building Information Management). She is a past chair of the Association for Geographical Information and is a Fellow and Technical Director with leading engineering consultancy Atkins. She argues things have changed for women:

“There has been a fascinating shift in appreciation of the role of geospatial in the wider digital transformation of the built environment – and its integration with the natural environment, and with people as individuals, businesses and society.  I don’t think there has been a more exciting and dynamic time to enter the geospatial sector – and be a part of responding to the significant global challenges we face.  The barriers which made it so difficult for women to enter the sector in the past I would suggest are being substantially removed – don’t hesitate to step forward and make a contribution. Together, we can make a difference.”

Meanwhile Pam Bhandal, who has organised the ‘Golden Thread’ panel where the majority of speakers are female, thinks panel discussions are one way of giving women a stronger voice:

“Over the last 15 years I have organised, attended and participated in events and  I have seen the number of women attend grow at a steady rate. Unlike the number of women speaking at events, which has grown at a much slower rate.  Hosting panel discussions where the majority of the panel are women is one way of supporting and encouraging them to get involved.  A panel discussion is less formal than presenting slides by yourself on stage to a large audience.  At GEO Business, I have organised the ‘Golden Thread’ panel where the majority of speakers are female.  This isn’t because they were female, but the best in what they do when I was looking for speakers.”

Pam recalls: “One of my first ever presentations was to an audience of 400 people and without the support of Louise Kelly, global vice-chair of Women In BIM, I would have really struggled.  Through her guidance, feedback and the support of the core team of Women in BIM I delivered a content-rich presentation which met the attendees feedback.”

GEO Business Event Director Caroline Hobden comments: “We are delighted to have attracted such a strong line-up of female speakers to this year’s seminar programme. It reflects the growing role and influence of women across the Geospatial sector. We urge girls and young women contemplating their first career moves to attend GEO Business to discover the exciting and fulfilling careers that Geospatial can offer.”