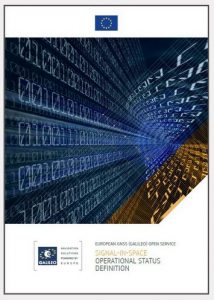 The release is a follow-up to a preliminary document issued last year for public consultation (OS SIS ISD, v1.0) and incorporates numerous improvements suggested by the user community during the consultation process.

The OS SIS OSD v1.1 is geared towards Galileo receiver manufacturers and is intended to serve as a guide to the use of the various SIS health indicators for implementation of robust navigation systems.

OS SIS OSD v1.1 complements the Galileo Open Service Signal-in-Space Interface Control Document (OS SIS ICD v1.2, 2015) by describing the encoding and use of the SIS Status for the OS.

The SIS Status, or the operational status of the OS SIS broadcast by each Galileo satellite, determines the applicability of the minimum performance level of services defined in the Galileo Open Service – Service Definition Document (OS SDD), which will be published later this year.

The OS SIS OSD, which is specifically targeted towards Galileo receiver manufacturers, is meant to serve as a guide to using the various SIS health indicators for implementation of robust navigation systems.