US: A start-up founded by former Google drone engineers, Adam Bry and Abe Bachrach, Skydio has developed a self-flying camera that makes aerial photography a hands-free task, according to a CNBC report. The UAV uses computer vision and other types of artificial intelligence to fly itself, follow and record a subject down below. What’s rather interesting about the UAV is that it doesn’t require any sort of piloting or camera skills.

The report quotes Bry saying, “This technology is like what’s being used in autonomous vehicles, in many ways. But of course, we had to develop this to deal with the general 3D motion of flying, and the lack of structure that goes with road systems.”

Unlike DJI’s market-dominating drones, the Skydio R1 is operated without any controllers. Instead, users launch the Skydio iOS or Android app, and tap the screen on their mobile device to tell the R1 who to follow.

With 13 different cameras, GPS and other sensors on board, the R1 maps its environment as it flies and can dodge trees or any other obstacles. Visual data and computer software let the R1 track and predict the movement of its subject below. It runs for 16 minutes on a charge and can fly up to 25 miles an hour, the company says.

Users can shoot professional-grade video in one of eight different modes — for example, they can “lead,” “follow,” or “orbit” a subject. Additional cinematic options are in the works.

Bry declined to say which retailers may one day carry the drone, or how many individuals and businesses had ordered them so far. However, he said, “We think this technology could be useful for a wide range of things, from inspections to mapping, monitoring and security. It’s not just to make beautiful videos. But we know people will be doing plenty of that.” 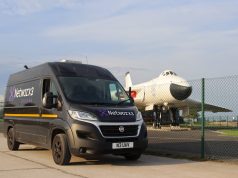