Canada: exactEarth has announced its financial results for the three- and nine-month periods ended on July 31, 2017. Total revenue for the three- and nine-month periods ended July 31, 2017 was $2.9 million and $10.0 million compared to $4.0 million and $15.6 million in the same periods last year. The change in revenue for Q3 2017 was primarily due to $1.5 million of non-cash revenue generated in Q3 2016 from an Asset Transfer Agreement with Communitech related to the EV9 satellite transfer.

Adjusted EBITDA for Q3 2017 and year-to-date was $(1.2) million and $(2.9) million compared to $(0.29) million and $0.86 million in the same periods last year. The year-over-year decrease in Adjusted EBITDA was primarily due to lower revenue from the GoC contract, offset in part by lower operating expenses.

“The key event of the quarter was the official service launch of exactView RT, our second-generation satellite constellation service,” said Peter Mabson, CEO of exactEarth. “Hosted onboard the Iridium NEXT satellite constellation, exactView RT is a system of more than 60 maritime satellite payloads that we believe will be the only offering on the market capable of delivering high performance high reliability real-time global vessel tracking for a population of more than 250,000 vessels.”

Mr. Mabson added, “As of today, our 16-satellite constellation includes nine exactView RT payloads in service, with additional launches expected through the end of this year and into 2018. Already we are receiving positive feedback from the market on the utility of this new capability in core application markets such as surveillance, vessel tracking and commodity flows. We believe that the real time exactViewRT capability will be a significant driver for the business going forward.” 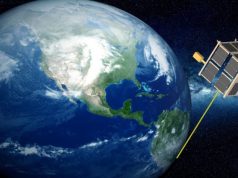 Government of Canada to Invest $7.2 Million in exactEarth